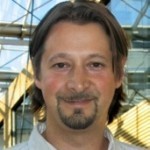 In placental mammals, both maternal and paternal genomes are required for normal development. This non-equivalence of the parental genomes is thought to represent the main barrier against parthenogenesis in mammals. This form of asexual reproduction in which only maternal DNA contributes to the offspring is frequently observed in insects and reptiles. In mammals, the parental genomes acquired at fertilization carry different epigenetic marks which are required for normal development. Genomic imprinting refers to this differential epigenetic marking of mammalian chromosomes in the male and female germ lines. One of the consequences of these differences between paternal and maternal homologues is the mono-allelic expression of certain genes according to their parent of origin. Unlike most genes used during development, imprinted genes are therefore only expressed from one allele, the other one being silenced by epigenetic marks such as DNA methylation and histone modifications. Because of imprinting, mutations in imprinted genes can therefore behave as dominant mutations, if inherited from the expressed allele, or as recessive mutations, when present on the silent homologue. A leading evolutionary theory to explain the emergence of imprinting in mammals proposes that imprinted genes regulate the exchange of nutrients between the pregnant female and her offspring during in utero development and the early postnatal period. The finding that imprinting seems to have evolved in lineages which exhibit placentation and that several imprinted genes are implicated in the regulation of embryonic growth and placentation all support this model.

My research program on genomic imprinting using the mouse as a model system is guided by two broad questions: what is the function of imprinting in mammalian biology, and what are the mechanisms underlying the mono-allelic expression of imprinted genes? We use homologous recombination in mouse embryonic stem cells and the site-specific Cre/loxP recombination system to engineer new mutations and chromosomal rearrangements within clusters of imprinted genes in the mouse genome. Using these techniques we have developed a new approach to introduce specific chromosomal truncations in the mouse genome. This allows us to study the phenotypic consequences of deleting large clusters of imprinted genes and has lead to the analysis of novel placental phenotypes associated with abnormal dosage of imprinted genes. We have also developed a new mouse line carrying a green fluorescent protein whose expression is regulated by genomic imprinting. This line is providing a new powerful tool to study the developmental cycle of epigenetic marking at an imprinted locus in vivo, particularly the elusive erasure of imprinting marks known to occur in the developing germline. Other ongoing projects in the laboratory address the role of imprinted genes in placental abnormalities, the characterization of a new maternally expressed placental gene and the analysis of a novel mechanism regulating allelic usage based on alternative polyadenylation at an imprinted gene.

Our work aims at elucidating important properties of the fascinating phenomenon of genomic imprinting, from the molecular basis of the underlying mechanism to the biological consequences of this mode of gene regulation. Our studies provide mouse models for human syndromes associated with imprinted genes and abnormal placentation and are ideal for students looking for a broad training in mouse developmental and molecular epigenetics.