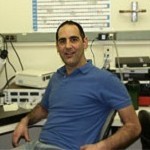 Studying the molecular mechanisms that are responsible for cellular pacemaking behaviour and that underlie the function and expression of “pacemaker” channels.

Research Relevance
The research aims to develop a better understanding of pacemaking electrical activity in cells, which may effect the treatment of conditions such as cardiac arrhythmias and epilepsy.

Understanding the Body’s Natural Pacemakers
Normal functioning of the heart and the brain depends upon specialized cells that act as pacemakers. In the heart, the pacemaker cells in the sinoatrial node set the heart’s beating frequency. The cells also generate rhythmic, spontaneous electrical impulses that can control muscle activity, certain automatic functions such as breathing, and behavioural states including arousal from sleep. Inappropriate pacemaker activity may lead to both inherited and acquired cardiac arrhythmias, and may also be involved in various neurological disorders such as epilepsy.

Canada Research Chair Dr. Eric Accili is the only scientist in Canada, and one of few in the world who focuses on “pacemaker” channels – the special membrane proteins found in the pacemaker cells of the heart and brain. Normally, positive ions flow through these channels and into the pacemaker cells, leading to repetitive activity.

In the heart, the pacemaker channels are the targets for hormones such as adrenalin. Adrenalin released during anxiety or exercise causes more ions to flow through the channels, thus increasing the heart’s beating frequency. In the brain, these channels are modified by neurotransmitters released by nerves, resulting in the modification of cellular pacemaker activity.

People with rapid heart rate are often treated with drugs known as beta blockers. These drugs, in addition to reducing heart rate, however, often compromise the strength of the heartbeat, which under certain conditions can be dangerous. What are needed are drugs that specifically block the pacemaker channels and reduce heart rate without compromising the strength of the heart. Understanding the basic mechanisms of pacemaker channel modulation, therefore, is a necessary first step in the design of therapeutic drugs.