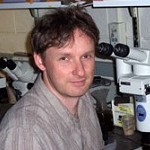 Neuronal specification during nervous system development and maturation in Drosophila

Complex nervous system function depends upon the generation of many different subtypes of neurons and the lifelong modulation of their function by intercellular communication. The identity and function of a particular neuronal subtype is a product of the unique repertoire of ‘terminal differentiation’ genes that it expresses (eg. guidance molecules, ion channels, receptors, neurotransmitter biosynthetic enzymes, neuropeptides etc).

These genes are turned on after the neuron is born, but how neurons turn on the right set of genes is still poorly understood. Two regulatory inputs have been shown to play a role in regulating the expression of such ‘terminal differentiation’ genes; 1) the unique code of transcription factors expressed within the neuron, and 2) factors/signals that are secreted from the target cell that the neuron innervates. Our studies in Drosophila have demonstrated that these two inputs may actually functionally intersect to determine the mature gene expression repertoire of neurons.

Our research aims to investigate the mechanisms by which neurons selectively express the genes that define their unique identities and functions, exploring the roles of combinations of transcription factors and extrinsic signals. The genes and mechanisms that govern cell specification are highly conserved from invertebrates to humans. Therefore, we can learn much about the fundamental principles and molecular mechanisms relevant to vertebrate neuronal differentiation using the simpler nervous system and genetic amenability of Drosophila.

Disruption of transcription factors has been linked to congenital neurological disorders, and disruption of intercellular communication and trafficking of target-derived signals has been implicated in neurodegenerative disorders. Our studies will provide a mechanistic understanding of how these factors control gene expression pertinent to neuronal function, advancing our understanding of the aetiology of neurological disorders.

Our laboratory is situated in the Life Sciences Institute on the UBC Main Campus. Together with Dr. Shernaz Bamji, we run The Facility for Synaptic Imaging which consists of upright and inverted Olympus FV1000 laser scanning confocal microscopes. We also share a dedicated, fully-equipped Drosophila Facility with other fly labs in the building.