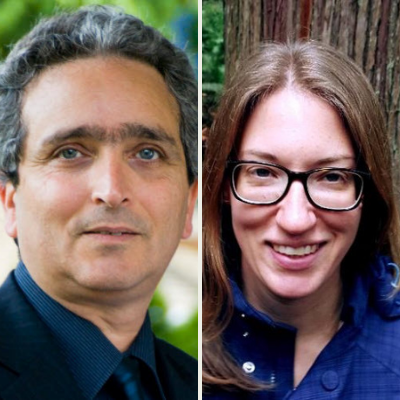 Dr. Cara Haney and Dr. Yossef Av-Gay are among 10 research project leads to receive funding from Cystic Fibrosis Canada in its latest round. Announced May 10, more $2.1M in grants aimed at addressing the priorities and improving the health outcomes of people impacted by cystic fibrosis (CF) were awarded through the 2021 Grants & Awards Competition.

“I’m so proud to receive an Early Career Investigator Award,” Dr. Haney wrote today in a tweet. “I hope this work will inform why Pseudomonas is such a pervasive opportunistic pathogen, and help eradicate it in CF.”

Research funded in the 2021 Grants & Awards Competition, Cystic Fibrosis Canada was informed by patient consultation. CF Canada assessed research applications for scientific merit and alignment to the priorities of the Canadian CF community, with multiple high-ranking proposals vying for funding.

Haney’s research addresses the community-identified priority of eradicating chronic pseudomonas aeruginosa infections. Pseudomonas is a major cause of lung infections in people with cystic fibrosis. The bacteria thrive in moist environments and equipment, such as humidifiers and catheters in hospital wards, and in kitchens, bathrooms, pools, hot tubs, and sinks.

Dr. Av-Gay’s research targets another identified priority: improving airway infection detection and treatment. Mycobacterium abscessus is one in a group of nontuberculous bacteria that live in soil, swamps and water sources, that began to be identified in the lungs of people with CF starting in the 1990s.

“It is important that the research we fund addresses the top concerns of Canadians living with cystic fibrosis,” said Dr. John Wallenburg, Chief Scientific Officer, Cystic Fibrosis Canada. “This year, together with our expert scientific panel, eight members of the Canadian cystic fibrosis community evaluated the research proposals. These community reviewers provided the needed link between the science and the lived experience and not only helped us to select the best science, but also the proposals that most closely aligned to the needs of our community.”

“We are committed to ensuring all Canadians living with cystic fibrosis have longer and healthier lives. Research is needed so that we can alter the course of this disease and leave no one behind,” said Kelly Grover, President and CEO, Cystic Fibrosis Canada. “Thanks to the generosity of our donors, we are supporting promising research projects that will have outcomes that benefit patients sooner rather than later, particularly for those with limited treatment options.”

Cystic fibrosis is the most common fatal genetic disease affecting Canadian children and young adults. There is no cure. Of the Canadians with cystic fibrosis who died in the past five years, half were under the age of 37. Cystic fibrosis is a progressive, degenerative multi-system disease that affects mainly the lungs and digestive system. In the lungs, where the effects are most devastating, a build-up of thick mucus causes severe respiratory problems. Mucus and protein also build up in the digestive tract, making it difficult to digest and absorb nutrients from food. In addition to the physical effects of the disease, mental health concerns are emerging; anxiety and depression are common among this population. Double lung transplants are the final option for patients with end-stage disease; most fatalities of people with cystic fibrosis are due to lung disease.

Information and quotes from CF Canada utilized in this story were taken from a press release on the Cystic Fibrosis Canada website.