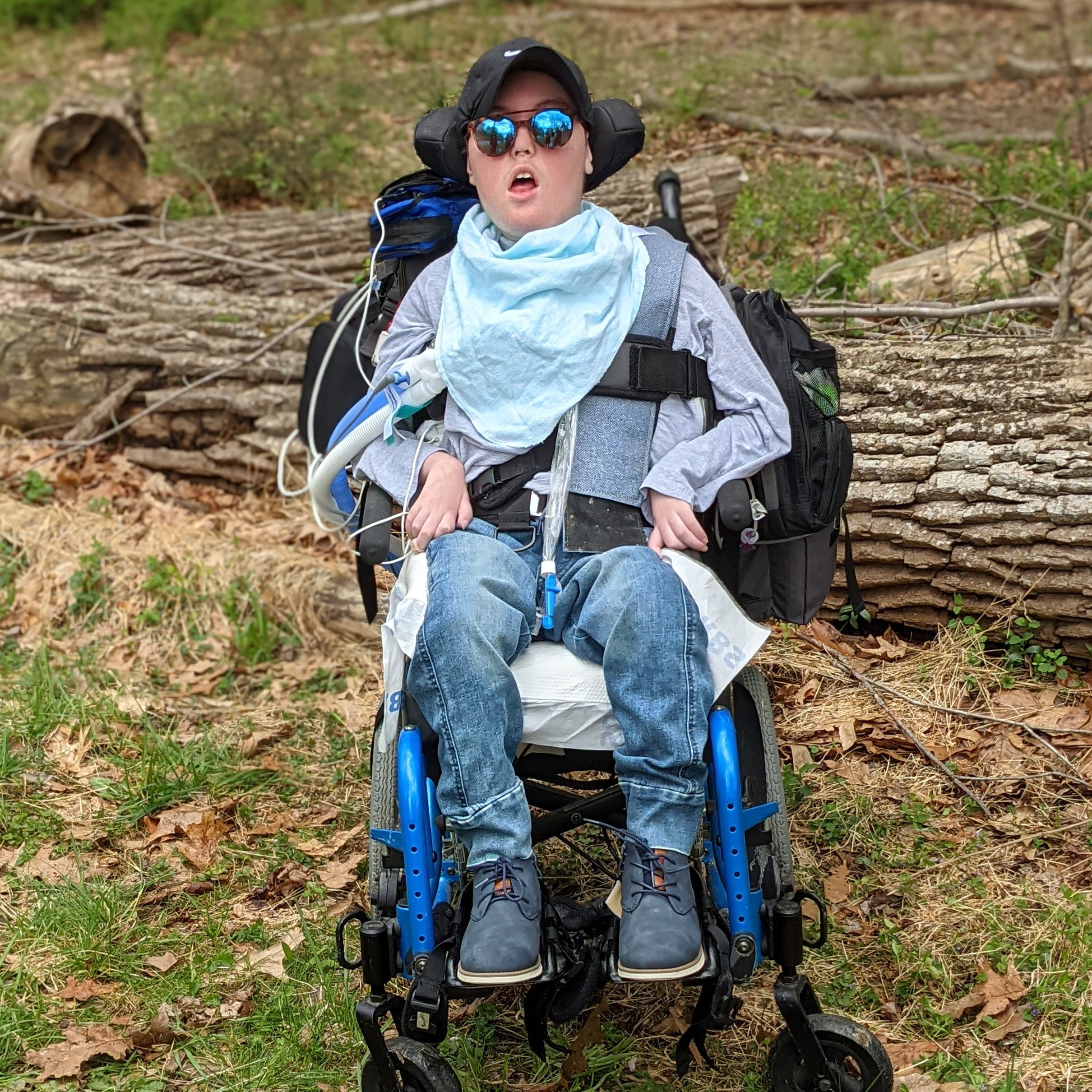 When Dovid Harris was a baby, he was constantly getting sick, was hard to feed, and had difficulty maintaining head control. By the time he was a year old, he was gastric tube fed, and required BIPAP (a form of non-invasive ventilation) at night to give his breathing muscles a chance to rest.

At the time he was born 15 years ago, Dovid’s parents had no idea what was wrong. It took nine years to obtain a diagnosis of Vici Syndrome, a rare genetic disorder that had only begun to show its devastation in early life. As he’s gotten older, Dovid’s health issues have become progressively worse and more complex. He now uses a wheelchair, receives regular IVIG infusions at home for his immune dysfunction, and has a trach tube to support his breathing. He also has low vision, severe adverse reactions to many medications, and requires a very specialized diet due to extreme food intolerances.

His condition is so rare–fewer than 100 cases have been reported world-wide–that little was known about the disease beyond the hallmarks of weak muscle tone and the absence of a fully formed corpus callosum, the tissue that connects the left and right halves of the brain. Read more about Vici Syndrome

Key insights from the Yip lab
Dovid’s father, Michael, a bioinformatics scientist from Silver Spring MD, reached out to both basic and clinical researchers as part of an international odyssey of seeking and sharing information. Among those researchers was Dr. Calvin Yip at the LSI, whose high-impact 2021 paper explored the protein structure of hEPG5, the gene that causes Vici Syndrome, caught Michael Harris’ eye.

“If there were a drug that would make our son a little bit stronger, that would help him tremendously in terms of his respiratory status, and ability to do things – to interact, or communicate–that would be a huge impact for him. But I think also in terms of general science, these ultra-rare diseases, if the biological mechanisms can be understood, it might open insights into many other diseases that are related,” Michael Harris said in a video made for the National Institutes of Health’s National Center for Advancing Translational Sciences. 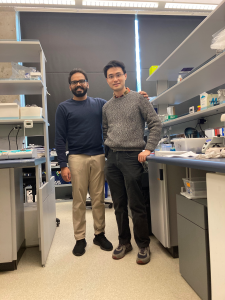 Autophagy’s central role
One such biological mechanism, autophagy, is the cellular process of cleaning away damaged or unnecessary components. It plays a crucial role in Vici Syndrome, Dovid’s condition, and is at the center of Dr. Yip’s research program at UBC’s Department of Biochemistry and Molecular Biology.

His expertise piqued the interest of Dr. Carlo Dionisi-Vici, the physician who identified Vici Syndrome, and whose patients helped a team in London (UK) establish the link between the disorder and mutations in the protein EPG5.

“We recently published a research article on EPG5 that plays a critical role in the so-called autophagy degradation pathway (Sung & Cheung et al., Communications Biology 2021),” says Dr. Yip. “We are collaborating with clinicians, including Dr. Dionisi-Vici, with the goal of understanding how mutations to the EPG5 protein lead to serious pathologies. We were also greatly excited to be contacted by Michael and Rachel Harris, whose child is affected by Vici Syndrome.”

Breakthrough work on Elongator, a protein complex that mediates modification of transfer RNAs
Defects in other cellular processes also lead to several rare diseases and neurodevelopmental conditions. Dr. Yip and recent PhD graduate Dr. Udit Dalwadi published a study in ACS Omega looking at Elongator, a protein conserved in life forms ranging from yeasts to humans that has been linked to Familial Dysautonomia. This rare hereditary neuropathy is characterized by symptoms such as decreased pain and temperature perception, lack of deep tendon reflexes, and progressive damage to the optic nerve.

“Mutation to a gene that encodes a component of Elongator (ELP1) causes Familial Dysautonomia,” explains Dr. Yip. “The mutation causes a so-called mRNA mis-splicing event that results in the generation of a shortened ELP1 protein which affects the formation of the Elongator complex.”

The normal function of Elongator in modifying transfer RNAs (tRNAs) is essential for fast & correct decoding of mRNA signals and turning them into proteins,” adds Dr. Dalwadi. “Post-mitotic cells (like neurons and other cells in the nervous system) are especially sensitive to any slowdown or mistakes in protein translation. Because of this, mutations in or mis-regulation of Elongator presents as such a range of grievous neurological disorders. By working with and purifying the human version of the protein directly, we hoped to get more direct insights into the molecular basis of the many diseases Elongator is implicated in.”

Interest in Elongator in the Yip lab goes beyond its association with Familial Dysautonomia. “We are interested in basic understanding of how the different components of Elongator coordinate with one another to modify tRNA,” says Yip. “Our lab is fascinated by different “protein nano machines” in cells and how they were designed and how they perform their critical functions.”

For Dalwadi, who will be starting work in March as a scientist for Altos Labs, an American biotechnology research company in Silicon Valley, interest in protein “nano machines” and health & disease relevance go hand in hand. “A large number of diseases arise from misregulation of proteins which function as a part of larger machine-like assemblies such as Elongator,” he says. “Our work on the yeast Elongator complex certainly began with the curiosity of understanding how such complexes are assembled and work together (Setiaputra et al. 2017 EMBO R), but the direct relevance of the human ortholog in devastating diseases was a big influence behind the pivot to studying human Elongator.” 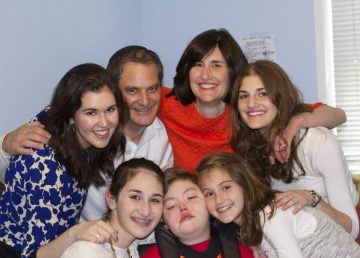 The Harris Family: Dovid with his parents and sisters

Hope for families
“There is some exciting development on the Familial Dysautonomia front,” concludes Yip. “A very recent paper reported the discovery of a small molecule compound can be used to “correct” the mRNA mis-splicing problem that leads to production of shortened ELP1 observed in Familial Dysautonomia. Their proof-of-concept experiments in cell and mouse demonstrated that this compound could serve as an effective therapeutic against Familial Dysautonomia.”

Treatment still seems to be far from patients with Vici Syndrome, Dr. Dionisi-Vici relayed in an email. There are probably implications for other neurodevelopmental conditions, he wrote, “since Vici Syndrome represents a disease paradigm of systemic clinical manifestations connected to the autophagy machinery.”

Described by his mother Rachel as a fighter, Dovid Harris clearly takes after his parents. The Harris’s have established a cell line for Dovid and other family members in the NIGMS cell line collection at the Coriell Institute for Medical Research – where submission of samples is free for rare disease patients, and can be easily accessed by researchers. Michael Harris hopes the collection will grow to include samples from other Vici patients, increasing the likelihood that any therapeutics discovered may work for more Vici kids.

Michael reached out to Dr. Yip to make him aware of the resource. “I’ve learned the power of these openly available samples,” he says. “We had problems getting samples sent from one institution to another. Coriell has been really amazing.”

The Harris’s are the impetus behind a drug repurposing project based at the University of Kansas Medical Center and Children’s Mercy Hospital Kansas. Sifting through all FDA-approved drugs, they are utilizing the biobank cell lines including iPSC cell lines, to screen for a drug that may address the disorder’s hallmark defects in autophagy. “We also have a control cell line from a patient’s sibling who is not a carrier, which researchers can use as a control to see what the expected amount of autophagy function should be,” says Harris, who adds that he would love to have follow-up conversation with Dr. Yip around areas of collaboration. “That’s the way to make progress.”

That kind of collaboration has led to development of a mouse model for Vici.

Michael Harris believes that though Vici is unquestionably rare, 100 cases is definitely an underestimate. A Facebook group for Vici families set up by a chance acquaintance has more than 150 members. The platform smoothes the way with translations from many languages from across the globe. The Harris’s have also created a non-profit organization that also helps facilitate connections.

“Our antenna is always up,” says Michael, “listening for possible treatments.”