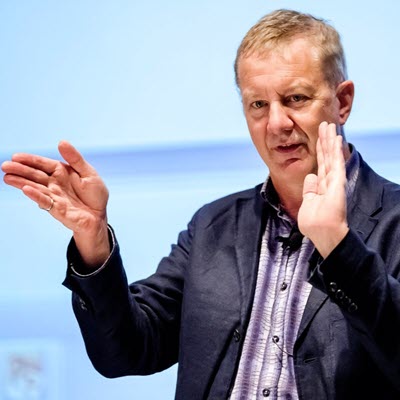 A UBC-led research team has uncovered how the virus responsible for causing COVID-19 escapes destruction in infected cells, allowing SARS-CoV-2 to persist and continue spreading in the human body.

The finding explains the cellular coup d’état staged by the novel coronavirus, and how it disrupts normal cell defenses to hijack human host cells.

“We discovered that the virus attaches to and deactivates an important sensor protein in the host cell called galectin-8, which protects the cell against infection. By deactivating galectin-8, SARS-CoV-2 disarms a cell’s antiviral defense system and allows the virus to take over the host,” says Dr. Chris Overall, the study’s senior author and, a Canada Research Chair, and a principal investigator at the Life Sciences Institute, UBC Centre for Blood Research and Faculty of Dentistry.

Overall assembled a team of local, national and international collaborators to provide samples for this study, which was published in Cell Reports. The study’s co-lead authors, Dr. Isabel Pablos and Dr. Yoan Machado are both postdoctoral fellows in his lab. Local Investigators participating in the study included Drs. Jayachandran Kizhakkedathu, Centre for Blood Research, and Eric  Jan, Department of Biochemistry and Molecular Biology from the LSI, and Honglin Luo, Center for Heart Lung Innovation, St. Paul’s Hospital.

In order to turn host cells into virus-producing machines, SARS-CoV-2 uses Spike proteins, which surround the outside of the virus, to attach to, invade, and seize control of the host.

The researchers made the important discovery that galectin-8 attaches to the Spike protein. The virus then deactivates galectin-8 by using one of its own key enzymes, called the 3CL protease, to target, attach to and cut galectin-8 in half, like a pair of molecular scissors. 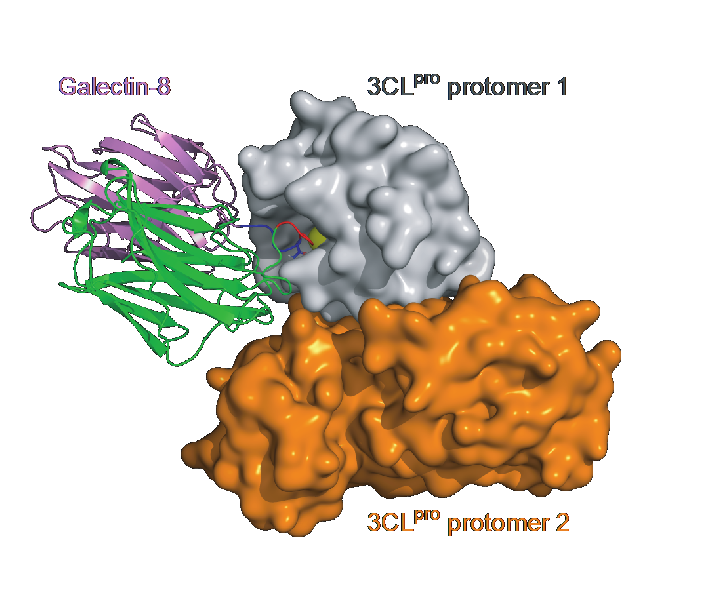 Galectin-8 bound to a dimer made of two viral 3CLpro proteases. Galectin-8 is then cut in its middle between its purple and green end domains on a short strand of the protein, coloured blue and red, by the active centre of the protease.

Galectin-8 protects the host cell against viruses through a defense response called xenophagy: where an infected cell captures invaders like viruses in small, fluid-filled sacs, then kills them by injecting these sacs with destructive molecules. By splitting galectin-8 in two, the virus prevents galectin-8 from carrying out its crucial job, sabotaging the host’s ability to kill the virus and allowing COVID-19 to continue progressing in human cells.

The key enzyme makes a single cut at a specific molecular site in galectin-8, which we precisely identified through a specialized proteomics technique developed in the Overall Lab,” says Dr. Pablos. “This single cut will likely impair the ability of the cell  to destroy the virus.”

Normally, the 3CL protease is a key enzyme that helps viruses replicate, but the researchers’ work shows that SARS-CoV-2 has cleverly evolved an ability that makes its own key enzyme multifunctional, allowing it to maximize its capabilities.

Using high-resolution microscopy images of COVID-19-infected lungs donated from victims of the disease, the researchers showed that the function of galectin-8 was disrupted in the badly infected lung cells.

In addition to galectin-8, the researchers also identified around 150 other host cell proteins that are targeted, cut and deactivated by the virus’s key enzyme. It is the deactivation of these host proteins that drives the virus’s ability to take over human cells.

“It’s incredible how the virus can so efficiently inhibit a host cell’s normal abilities by targeting and cutting these essential cell proteins,” says Dr. Machado. “In our study, we identified over 150 molecular sites that are important to basic cell functions and are targeted for cutting by SARS-CoV-2’s main protease.”

The cell is made much more vulnerable for viral takeover when these targeted sites are cut. Four molecular sites that the researchers identified are part of the Hippo signalling pathway, which controls cell shape, tissue growth, cell death, and other important functions. By cutting these sites, the virus suppresses the host cell’s ability to carry out many of its normal functions, creating optimal conditions for SARS-CoV-2 infection.

“By understanding how SARS-CoV-2 hinders a host cell’s ability to defend itself, and identifying which molecular sites are cut in order to accomplish this, we can finally understand how the virus hijacks the cell,” says Overall.

“This valuable new knowledge enables us to identify new approaches and drugs to target these sites, with the aim of preventing the virus from deactivating crucial cell functions – all important insights for guiding drug development.”

Story by Kristine Ho, Communications Coordinator for the Centre for Blood Research