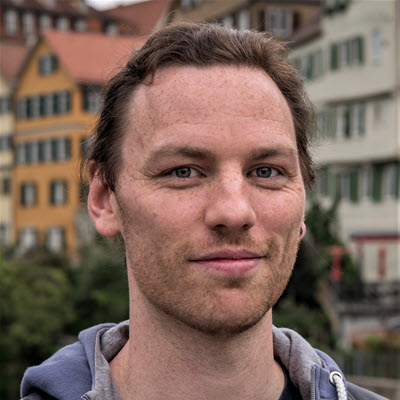 As UBC begins consultation on its 2030 Climate Action Plan, Moritz Koch, a new postdoctoral fellow in the LSI, is working to propel a bacteria-based biodegradable alternative to petroleum-based plastics to market.

During his PhD at Tübingen University in Germany, Dr. Koch developed a “living plastic ball,” out of cyanobacteria, also known as blue-green algae. These microscopic organisms are found in all types of water, and even form the surface crust on desert rocks and sand.

“I became a cell engineer,” says Koch describing how he came to coax the bacteria to boost production of polyhydroxybutyrate (PHB), a CO2-neutral material generated through photosynthesis, that many cyanos use for storage.

PHB makes up about 10 percent of the dry weight of a cyanobacterium in its native state. Working with a team in the Forchhammer Lab at the Interfaculty Institute of Microbiology and Infection Medicine, Koch succeeded in increasing that level to 80 percent, without killing off the bacteria.

He delved into understanding which conditions favour PHB production, as well as how PHB is distributed among the cells. In the process, he discovered a new protein, Slr0058, which strongly affects the number of PHB granules within the cells, and also contributed to discovering another regulator, PirC. “It all came together in the last few months of my PhD,” Koch reflects.

“I was able to show that PHB is mainly produced from the intracellular glycogen pools, and to achieve a significant increase in cellular PHB production through metabolic engineering – modifying cyano’s metabolism to increase PHB production.

“This demonstrated, for the first time, that our cyanobacteria have the potential to serve as microbial cell factories for the carbon-neutral production of sustainable products, such as our bioplastic,” continues Koch. “Yes, other organisms also produce PHB, such as Cupriavidus necator and Pseudomonas putida. Both of these strains require an organic energy or carbon source, such as sugars. In contrast, we can now produce PHB from atmospheric CO2 and sunlight. They are quite literally CO2 vacuum cleaners.”

Sustainability was the driving force behind his doctoral work, and the motivation behind a move to Vancouver as a place to further his aspirations in the midst of the pandemic. Though behind European centres in embracing this practice in all things, Vancouver ranks in the top 10 among the world’s sustainable cities.

“Worldwide, we have two major ecological problems: climate change and the pollution of our ecosystems with plastic waste,” says Koch. “About 370 million tons of plastics are being produced every year. We need to get this under control.”

So far, there is no commercial entity producing PHB in cyanobacteria at scale. With global plastic production forecast to increase an additional 40 percent over the next decade, Koch, and others feel a sense of urgency.

Still in Tübingen, Koch reached out to Raphael Roccor, a PhD student in the Eltis Lab who is also the founder of a biotechnology company. Roccor, an ECOSCOPE participant being mentored by Dr. Steven Hallam, sensed synergies, and put the two in touch. “After several digital exchanges with Moritz, we realized it was a good fit, interpersonally, intellectually, and also from a values perspective,” says Dr. Hallam. We developed a research plan, and Moritz made the trip to Vancouver.”

Koch is just settling into work characterizing the properties of a different, industrial cyanobacterial strain that could become a suitable chassis for developing a biofactory platform capable of producing a variety of value add-compounds, including plastics. An accolade has followed him from Tübingen to Canada: In mid-March, Koch was notified that his thesis won a doctoral prize from the Association for General and Applied Microbiology (VAAM ), one of the most prestigious PhD awards in microbiology in Germany. 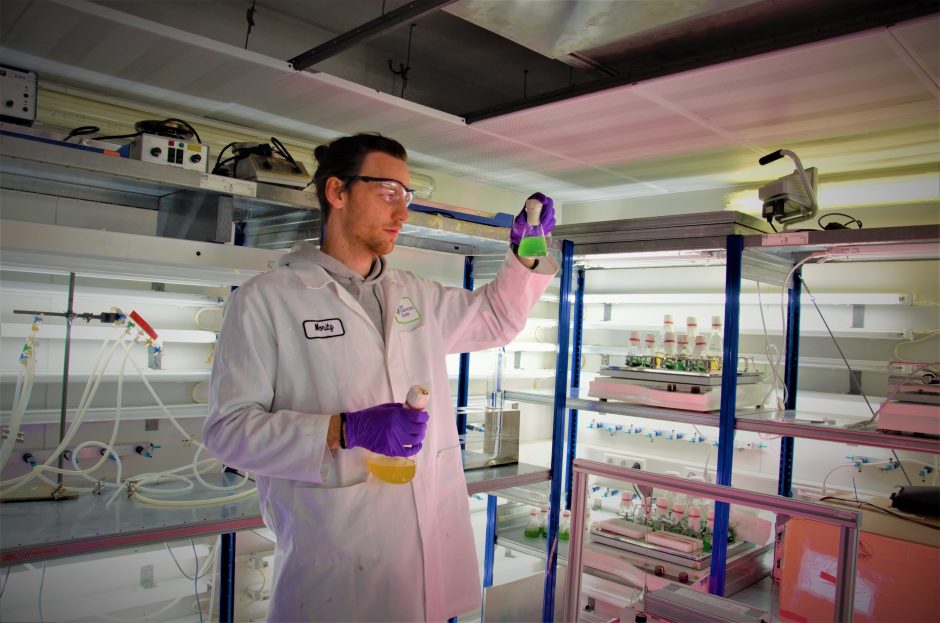 “Moritz works within a collaborative team called the cyano group, that has connectivity to a local photobioreactor design company,” says Dr. Hallam. “We’re in the process of working through some ideas for infrastructure, as well as operating grants to move the project forward. Initial work on this project was the brainchild of PhD student Avery Noonan, who came to work with me on developing CRISPR recombineering tools for cyanobacterial pathway engineering.

“I’m not sure if and when we will replace petrochemical plastics, given their versatility and low cost,” says Hallam, “although there are clearly alternatives now that can be factored into niche markets.

“The power and promise of cyanos relates to scalability, efficiency of production, and potentially, programmability,” he adds. “The latter depends on developing genetic systems in relevant industrial strains to essentially manufacture different polymers based on pathway engineering.”

Building on innovative community outreach and sustainability initiatives he led in Tübingen, Koch is galvanizing a group of like-minded postdoctoral fellows. “Everything is very, very fresh, and we’re currently still in the process of deciding exactly what we’d like to do as a group,” he says. “We’re kind of a subgroup of the UBC Postdoctoral Association.

So far, it seems like we may develop interdisciplinary research projects together. We may also pursue educational avenues or political activism to advocate for more sustainability. Anything’s possible at this stage! When it comes to current ecological crises, like climate change, we won’t be able to solve them only with technological solutions. We also have to consider societal and political measures to transform our society towards more sustainability. It’s a long road ahead. But it’s an exciting journey and everyone can, and should, participate.”