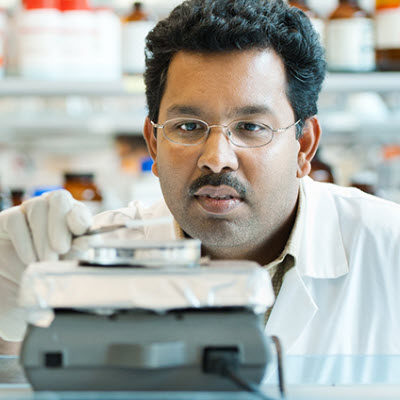 Congratulations to Dr. Jayachandran Kizhakkedathu, who was recently named a Fellow, Biomaterials Science and Engineering (FBSE)!

Announced at the 11th World Biomaterials Congress in December 2020, Dr. Kizhakkedathu is one of three Canadian professors who have been inducted as Fellows, a recognition that celebrates the researchers’ outstanding contributions to biomaterials research, education, and service.

The honorary designation of “Fellow, Biomaterials Science and Engineering,” was first established in April 1992, after the constituent biomaterials societies of the World Biomaterials Congress – now known as the International Union of Societies for Biomaterials Science and Engineering (IUS-BSE) – recognized that members who hold excellent professional standing and high achievements in those fields are deserving of public recognition. Fellows are defined as those who foster advancements of the biomaterials field, and support its professional development as a practical and intellectual endeavour.

Dr. Kizhakkedathu is a member of the Centre for Blood Research (CBR) at the University of British Columbia (UBC), a professor in the Department of Pathology and Laboratory Medicine, and an Associate Member with the Department of Chemistry and the School of Biomedical Engineering. His research encompasses multiple themes, including macromolecular therapeutics, cell-surface engineering, proteomic reagents, and blood-compatible surfaces and devices. A key focus of his work is on biomaterial innovation, with a common foundation in applied hematology and translational medicine.

In addition to his recent induction, Dr. Kizhakkedathu has received numerous other awards and recognitions, including the Faculty Research Award in 2018, the UBC Killam Research Prize in 2017, the UBC Faculty of Medicine Distinguished Achievement Award in 2013, and the Department of Pathology and Laboratory Medicine Excellence in Research and Discovery Award in 2011. He was also recognized as a Michael Smith Foundation for Health Research Scholar in 2011 and was honoured with the Canadian Institutes of Health Research New Investigator Award in 2005.

Dr. Kizhakkedathu’s research has been published in numerous scientific journals, including Science Translational Medicine, Nature Materials, Nature Biotechnology, Nature Communications, Blood, Journal of the American Chemical Society, Biomaterials, among many others, as well as in several patents.

Well done to Dr. Kizhakkedathu on his induction into this distinguished group of scientists!

This story by Kristine Ho originally appeared on the Centre for Blood Research website.
Photo courtesy of the UBC Faculty of Medicine