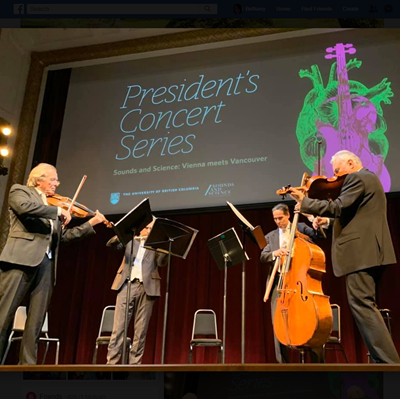 A virtuoso performance by UBC researchers and members of the Vienna Philharmonic Orchestra sold out UBC’s Old Auditorium November 30.

Inspired by a successful series run by Medizinische Universität Wien, Sounds and Science – Vienna Meets Vancouver drew a diverse and enthusiastic audience. Many attendees expressed an interest in Sounds and Science becoming an annual event.

For those who missed this exceptional evening, JoyTV and its CARPe Diem show will be producing an episode focusing on the concert, to be aired in February, 2020.

LSI extends deep appreciation to President Santa Ono for including Sounds and Science in the President’s Concert Series, as well as UBC Ceremonies and Events and the Faculty of Medicine Development Office for their tremendous support in producing the show.