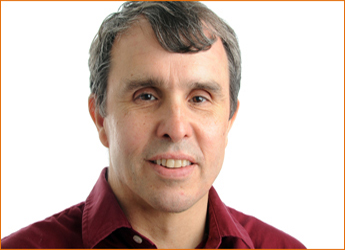 Bringing the ASCB to the LSI

Dr. Eric Betzig is an American physicist based at the Janelia Farm Research Campus in Ashburn, Virginia. He has worked to develop the field of fluorescence microscopy and photoactivated localization microscopy. He was awarded the 2014 Nobel Prize in Chemistry for “the development of super-resolved fluorescence microscopy”, along with Stefan Hell and fellow Cornell alumnus William E. Moerner.

Both events are free and open to all. No registration required, but seats are first-come, first-served, so please arrive early.

After obtaining a BS in Physics from Caltech, he moved to Cornell, where his thesis involved the development of near-field optics – the first method to break the diffraction barrier in light microscopy. Betzig then became a PI at AT&T Bell Labs in Murray Hill, NJ, where he further refined the technology and explored many applications, including high density data storage, semiconductor spectroscopy, and superresolution fluorescence imaging of cells. In 1993, he was the first to image single fluorescent molecules under ambient conditions, and determine their positions to better than 1/40 of the wavelength of light.

Tiring of academia, Betzig then served as VP of R&D in his father’s machine tool company, developing a high speed motion control technology based on an electrohydraulic hybrid drive with adaptive control algorithms. Commercial failure of the technology left him unemployed and looking for new directions. This search eventually culminated in his invention (with Bell Labs expatriate, Harald Hesand) and demonstration of the superresolution technique PALM s. Since 2005, Betzig has been a Group Leader at Janelia, developing new optical imaging technologies for biology.

Dynamics from Molecules to Organisms

The hallmark of life is that it is animate. To gain a better understanding of how inanimate molecules assemble to create animate life, it is necessary to image the dynamics of living organisms noninvasively at high resolution in both space and time.  However, there exist inevitable tradeoffs of spatial resolution, speed, non-invasiveness, and imaging depth.  I will describe various methods that balance these tradeoffs in different ways: super-resolution fluorescence microscopy for cellular imaging at the nanoscale; lattice light sheet microscopy for imaging rapid three-dimensional dynamics in cells and embryos; and adaptive optics for studying cellular processes deep in multicellular specimens.

Presented by: UBC Cellular and Physiological Sciences, the LSI, Graduate Program in Cell and Developmental Biology (the CELL Program) and LSI Imaging.