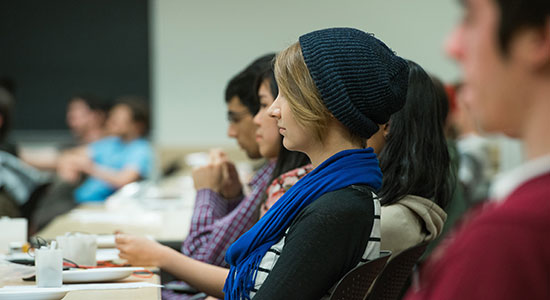 Since 2012, dedicated UBC medical students have been spending their summers advancing research and facilitating new ideas in scientific discovery alongside expert researchers at UBC’s Life Sciences Institute (LSI). As they strive to improve the understanding and outcomes of disease, two undergraduate students, who wish to pursue a career in the biomedical sciences, are supported by the $5,000 Fisher Scientific Summer Studentship Award..

For many future medical students, the Summer Studentship is their first experience in the research environment, where they gain invaluable exposure to relevant questions in health. For example, past summer students have pursued critical research in nervous system development, diabetes, and brain functioning. Together, the Summer Studentship and the annual Fisher Scientific award are instrumental in encouraging the next generation of researchers to find novel solutions to today’s most pressing health concerns.

In the summer of 2013, Brendan Santyr, a student between third and fourth years of his science undergraduate degree, worked with Dr. Shernaz Bamji to identify whether specific molecules in the brain enhance brain activity and learning. He was successful at finding two molecules—DHHC5 and palmitoylated d-catenin—that help increase movement and neuron receptivity in the brain, stimulating learning and memory. Although further studies are needed to confirm his results, Brendan’s research sparked his interest in medical imaging technologies and neuron activity.

Now an MD candidate at Western University, Brendan recently published a paper in which he maps out the hippocampal region of the brain. Using these maps, Brendan aims to assess epilepsy and other neurodegenerative disorders and eventually find patterns that could lead to a cure. The Summer Studentship program at UBC has inspired Brendan to further explore questions in the biomedical sciences and may be the catalyst for innovative neurodegenerative treatments in the future.

Fisher Scientific strives to make the world healthier, cleaner, and safer by encouraging scientific advancement and improved medical knowledge. It often works with top scientists across UBC to find solutions to some of the world’s most pressing health concerns. Through the Fisher Scientific Summer Studentship Award, this innovative organization is also helping to inspire the next generation of researchers whose passion for discovery promises to enhance the wellbeing of people in BC and beyond.