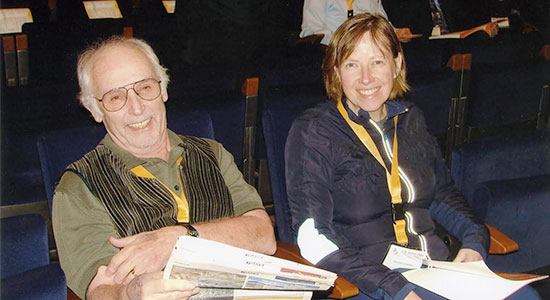 Sheldon Naiman and Linda Vickars leave a legacy in hematology

Drs. Shelly Naiman and Linda Vickars devoted their careers at UBC’s Life Sciences Institute (LSI) to solving the puzzles of hematology, with particular interest in the areas of inherited and acquired bleeding and thrombotic disorders, red blood cell and platelet disturbances, and white blood cell abnormalities. The couple loved helping patients through diagnoses—Dr. Naiman from the laboratory and Dr. Vickars from the bedside.

Dr. Naiman, the founding head of the Division of Clinical Hematology at Vancouver General Hospital, was instrumental in establishing the Bone Marrow Transplant Program for British Columbia and became head of the hematology laboratory at St. Paul’s Hospital in 1996. A former Clinical Professor, he was passionate about teaching and was widely recognized for this talent. Indeed, he won numerous teaching awards and was the first recipient of what is now known as the Dr. Patricia Clugston Memorial Award for Excellence in Clinical Teaching from the Professional Association of Residents of British Columbia.

“Mine was a career of teaching and laboratory work,” Dr. Naiman says. “Making a diagnosis of a bleeding disorder was always a challenge – I loved that sort of thing. My wife did too, and she did it well.”

Dr. Vickars, a Clinical Professor in the Division of Hematology, headed the St. Paul’s Division from 1994 to 2006. She oversaw the expansion of the Adult Provincial Hemophilia/Inherited Bleeding Disorders Program, the establishment of the Adult Provincial Hemogloginopathy Program and directed a provincial program overseeing the management of iron chelation therapy for persons with transfusion-related iron overload.

“More and more, especially lately, we’re getting answers and solving puzzles because of the research that’s being done,” Dr. Vickars said. “I’ve looked after families and known something wasn’t quite right, yet didn’t have the tools at the time to work it out. Then I’d get a phone call from a research laboratory with the answer. It was very exciting, not only for me, but especially the patients and their families!”

During their combined 65 years of service, the couple made a tremendous impact on their profession, partnering with researchers to make major leaps forward in diagnosis and treatment. In addition to their scientific and clinical contributions, Drs Naima and Vickars also made provisions in their will to establish the Sheldon Naiman and Linda Vickars Hematology Fund, which will support research, education and training in non-malignant hematology. Following the passing of Dr. Vickars in 2014, an outpouring of gifts from family and friends in her memory has added to the the couple’s legacy of healing and discovery.

“Our careers were part of our lives in an enormous way,” Dr. Naiman says. “We would like to see the learning continue, particularly in the field we truly loved.”