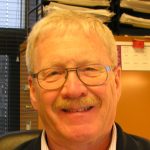 We study the Caulobacters – dimorphic bacteria that alternate between surface-attached stalked cells and motile dispersal cells. These harmless aquatic bacteria are found widely in the environment, as part of biofilms on surfaces. As a minor aspect we study the distribution of these bacteria world-wide and how they function within biofilm communities. Numerous other researchers focus on one species-Caulobacter crescentus, deciphering the details of how the bacterium controls its cell cycle and precise positioning of stalks, flagella and other “polar” features.

But our main research focus is directed to study of a regularly structured surface (S) layer and the biotechnology applications that derive from our understanding of this structure. The Caulobacter S-layer is a two-dimensional crystalline array on the cell’s surface composed of a single secreted protein. The S-layer probably helps Caulobacters fend off pathogenic bacteria, viruses and lytic enzymes. It appears to be important to cover the entire cell at all times and so this is the most abundant protein of the cell. We analyze the S-layer genetically and biochemically to understand the high level secretion apparatus, as well as to learn how the S-layer self-assembles and remains surface attached.

We then apply our findings with the S-layer to biotechnology applications. We have adapted the secretion capabilities of the highly expressed crystalline surface layer protein so that these harmless bacteria can secrete foreign proteins, such as subunit vaccines, enzymes and other proteins of commercial utility. When sequences are inserted into the S-layer they can be displayed at high density on the bacterium’s surface or the isolated S-layer protein can be assembled onto lipid vesicles. We have learned the S-layer is very tolerant of new additions and we can display antibodies, cytokines and cell receptors, in addition to vaccines antigens. Such capabilities open up possibilities for multivalent whole cell vaccine formulations for veterinary use and in anti-tumour formulations for human applications. We also are exploring development of an AIDS infection blocking agent (a “microbicide”) by displaying anti-HIV antibodies and mimics of the elements involved with the HIV infection process. Analogous projects are underway to block virus infection of shrimp grown in aquaculture and to eliminate Campylobacter carriage in chickens.