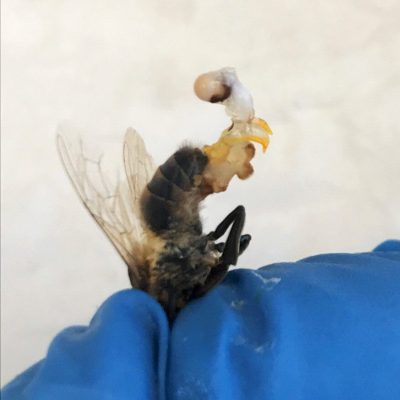 A bee having ejaculated to death | Image provided by Dr. Alison McAfee

Bees across Europe may die from the severe heat plaguing the continent this week, ejaculating explosively as they do so.

In the U.K. and parts of mainland Europe, temperatures have recently soared up to 104 degrees Fahrenheit in one of the hottest heat waves since records began. This heat, while dangerous for humans and animals alike, may have particularly bad effects on the honey bee populations we rely so heavily upon.

As reported in several stories that have gone viral, in severe heat, male honey bees could face a terrible fate: they begin to convulse, ejaculate explosively, then die. At temperatures over 107 degrees Fahrenheit, it is estimated that half of male honey bees will die in this manner within six hours, with more sensitive individuals dying after only two or three hours.

“We don’t know exactly why, but drones ejaculate when they get too stressed,” Dr. Alison McAfee, a postdoctoral fellow at the University of British Columbia’s Michael Smith Laboratories, told Newsweek. “Ejaculation kills them because it basically eviscerates their abdomen. This happens during natural mating too—drone honey bees always die after mating.”

The bees cool down their hives naturally, keeping it at around 95 degrees Fahrenheit. During heat waves, however, the balance is lost, and the males begin to die.

These unfortunate male bees tend to be more sensitive to environmental stressors like temperature, according to research published in the journal Communications Biology in February. The study suggests that this may be because male honey bees are haploid drones, meaning that they have half as many chromosomes DNA as female worker bees. This has previously been thought to make the males more vulnerable to biotic threats including pesticides, and now, it seems that temperature may also affect males more.

Read the rest of the story