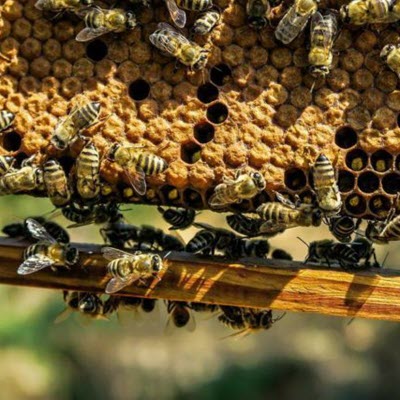 B.C. honey bee keepers are reporting a loss of 32 per cent of their colonies from through the winter – higher than a typical year, according to a survey published by the province. An article in the Kelowna Capital News quotes Dr. Leonard Foster as saying the  losses are likely caused by a combination of factors including pests and climate change.

While some colony loss is to be expected, this year’s losses are about 20 per cent more than what beekeepers say they would be happy or satisfied with, the voluntary survey completed by both professional and hobbyists found.

The survey received a strong volume of responses from Vancouver Island, Fraser Valley and Okanagan, with beekeepers in those areas reporting similar levels of losses. Beekeepers from northwestern B.C. reported higher average losses than the rest of the province, however, the data from the region is more inconsistent.

For Jeff Lee, he and his wife saw a loss of about 30 per cent at their business, Honey Bee Zen Apiaries in Creston.

There are competing perspectives on the cause of this year’s colony loss. According to Professor Leonard Foster from the University of British Columbia: “it’s complicated.”

Foster, who studies colony loss as part of the UBC’s BeeHIVE Research Cluster, suspects that weather patterns will play an increasingly significant role in colony loss.

He is careful to note that “there isn’t a direct relationship between any single extreme weather event” and colony loss, and that broader climate trends are more indicative than any individual storm or heat dome.

The varroa mite is a pest that beekeepers often cite as the cause of their losses. The mite originated in Asia and carries viruses that can be deadly for Canadian honeybees, which are usually from Europe or Oceania.

In 2018, Lee and his wife reported losses nearing 90 per cent because they did not appropriately prepare their colonies for the mites in time. Since then, they have begun treating their bees in August, which is generally enough to carry their colonies through the winter.

However, the bees that beekeepers maintain over the summer are not the same ones that they keep over the winter.

Winter bees have a life cycle of approximately six months while summer bees are much shorter, at about six weeks.

Once spring arrives, winter bees tend to have enough life leftover to begin preparing for the first batch of summer bees. However, this year, an unseasonably cold spring meant that the winter bees could not go about their preparations as they ordinarily would. This change caused a spike in losses.

Lee suspects that the cold spring (as well as the warm fall from last year) threw off his mite treatment timeline and resulted in a greater loss to the pests than in a typical year.

Since their losses in 2018, Lee and his wife have found new ways to address colony loss. Instead of simply enduring the losses or going out and buying entirely new colonies from abroad to replace their old ones, the couple now focuses on building their own colonies by only buying new queen bees and redistributing their current bees.

The process is lengthier than simply buying replacements, but is more cost-effective, according to Lee.

“We’ve got a good business model so we’re able to survive these things.”

This article by Sami Islam appeared June 21 in the online version of the Kelowna Capital News.