Is hyperinsulinemia the primary defect that results in type 2 diabetes? Or is it something else—hyperglycemia, beta cell defects, genetics?

“The big question is whether insulin resistance is primary or if hyperinsulinemia stimulates insulin resistance,” said James D. Johnson, PhD, Professor of Cellular and Physiological Sciences and Board Chair, Institute for Personalized Therapeutic Nutrition, University of British Columbia, Vancouver, Canada. “I would say that hyperinsulinemia is a primary defect. We know there are multiple types of type 2 diabetes and multiple ways of getting type 2 diabetes.” 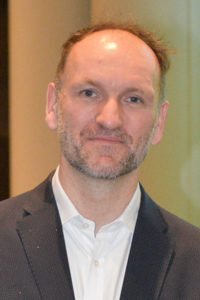 Both human and mouse data clearly point to hyperinsulinemia as an initiating step in the pathogenesis of type 2 diabetes, he noted.

Not so fast, responded Steven E. Kahn, MB, ChB, Professor of Metabolism, Endocrinology and Nutrition at the University of Washington and Director of the UW Diabetes Research Center.

“If you have normal beta cells, you will have normal beta-cell function and normoglycemia,” Dr. Kahn said. “But if your genetic makeup is different, you can have beta-cell dysfunction, reduced insulin secretion, and type 2 diabetes.”

There is no commonly accepted clinical cutoff for hyperinsulinemia, Dr. Johnson noted, though it is often defined as insulin levels above those needed for glucose homeostasis. The important measure is the absolute concentration of insulin that the liver and other tissues experience, not how much insulin beta cells are producing.The two debated current data and contrasting models of the development of type 2 diabetes on Friday, June 3, during the mini-symposium Revisiting Hyperinsulinemia as the Primary Defect in Type 2 Diabetes Pathogenesis. The session was livestreamed and can be viewed on-demand by registered meeting attendees at ADA2022.org. What’s clear is that hyperinsulinemia can trigger weight gain and obesity even in the absence of insulin resistance. Mouse models show that reducing endogenous insulin production prevents hyperinsulinemia and weight gain, even on a high-fat diet. In humans, chronic hyperinsulinemia can lead to beta-cell stress, impairing acute glucose-stimulated insulin release. Bariatric surgery, very low-calorie diets, ketogenic diets, and other approaches to drug-free remission of type 2 diabetes all show dramatic improvements in fasting insulin before any substantial weight loss.

“We are not measuring glucose mass action,” Dr. Khan said. “Reduced insulin-dependent glucose uptake has been reported in youth with obesity, metabolic syndrome, and impaired glucose tolerance, as well as in adults who are first-degree relatives of individuals with type 2 diabetes. Reduced insulin-independent glucose uptake predicts the development of diabetes in these individuals. This piece of glucose metabolism has been incredibly overlooked. It needs to be studied further to help understand what is going on. We have to start doing studies that aren’t bracketed by five-year grant terms. We have to know what is going on from pregnancy to adulthood and older age.”