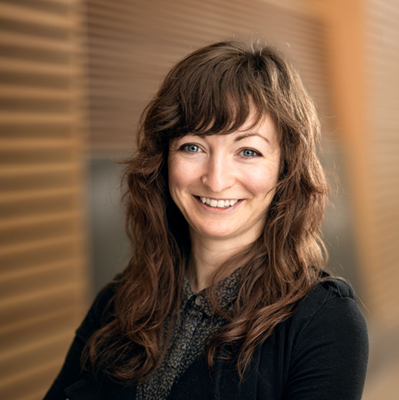 Generally speaking, acids are dangerous. Not the kind of thing you should eat or drink. But fruit flies love a comparatively mild form – lactic acid – even when they can’t smell it.

Dr. Molly Stanley, who is just finishing a fellowship in the Gordon lab, investigated how fruit flies experience sourness, using calcium imaging to look at the activity of neurons involved in taste. In a paper published in Current Biology that received a 2021 Brain Star Award, Stanley and colleagues were the first to describe the sensory neural circuit for taste attraction to acid.

“Sour has been studied almost exclusively in an aversive context,” says Stanley. “We wanted to see what kind of taste cells were actually sensing the acid to mediate that behavioural attraction to lactic acid. We were surprised to find that it was actually the sweet taste neurons. These are the same neurons that are detecting sugar, are directly activated by lactic acid, and some other acids. It’s what’s driving the animal to actively be attracted to, and consume those acids.

These are specialized cells, comparable to those in mammals. “We found that the neurons have different receptors that can detect a sugar versus an acid molecule versus a different type of sugar. So, we found the acid-sensing in the taste cells depended on the kinds of receptors that these cells express,” says Stanley. “So, it seems as though some are responding to the lactate part of the chemical through one type of receptor, whereas this acidic pH is sense by another receptor in other, and sometimes overlapping cells, in a different manner.

“We started out thinking that the lactic acid taste project would be simple, but soon learned it was far from it,” says Dr. Michael Gordon, senior author on the prize-winning Current Biology publication, and Molly Stanley’s postdoctoral supervisor. “It was only Molly’s ingenuity, persistence, and key eye for details that got us past big hurdles and into all sorts of fun details that kept revealing new surprises.”

“So, you have the molecule itself, and you have the pH, and finding those are actually sensed, somewhat distinctly, was surprising,” adds Stanley. “When you think about taste vs smell, or vs other senses, taste might seem simple. Even for one type of taste, even one single molecule activates multiple types of taste cells using multiple types of receptors, even in a simple organism like the fruit fly. I think it’s pretty telling. We’re finding more and more that taste is actually extremely complex.

There are interesting implications in these findings for higher order animals, including mammals, in whom “the search for the sour taste receptor has focused on pH,” according to Stanley, “something that can actually sense the protons that are making the solution acidic.” A proton receptor channel in mammalian taste cells involved in sour tastes has been identified, “but when you look, it’s not only one kind of taste cell activated by acids in mammals,” she adds. “There is more than one type of taste cell, and this proton channel that they found in and of itself doesn’t explain all of the taste activation you get from acids.

“So similar to what we found in this paper, there’s probably also multiple receptors that are detecting these different parts of that acid molecule pH versus the actual lactate in this case, itself, and coincident, both activating different receptors, perhaps in different types of taste cells in response to that same chemical.”

Next Steps
Dr. Stanley has accepted a tenure track faculty position at the University of Vermont, where she will continue studying food-brain connections using the fruit fly as a model organism.