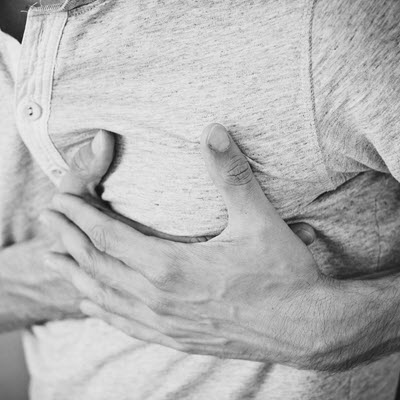 Just seven days shy of her 28th birthday, a star Italian swimmer dies of a heart attack.  A bill is passed into law in Wisconsin requiring pediatric cardiologists to educate coaches, athletes and parents about the nature and risk of sudden cardiac arrest during youth sports. Cardiac Risk in the Young (“CRY”), a UK organization, holds a weekend of heart screenings for 14-35-year-olds.

Scarcely a week goes by without news of a young athlete in peak form tragically dying of what is known as sudden cardiac death, or SCD. An estimated one in 40,000 to one in 80,000 young athletes is lost on the playing field, in the pool, or on the track. But it’s not only athletes who are affected. SCD is considered a major global health problem, with SCD comprising 25 % of the 17 million casualties per year attributed to sudden and unexpected cardiac death. Rather than being caused by blockage, SCD can occur when the heart’s electrical system malfunctions. The heart no longer pumps blood efficiently, restricting access of the brain to oxygen. Loss of consciousness and death may occur quickly without immediate treatment. 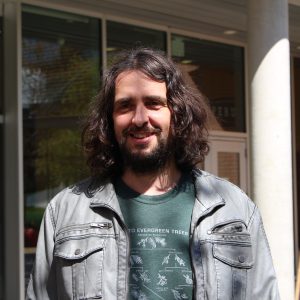 Dr. Filip Van Petegem, a professor in the department of biochemistry and molecular biology at UBC has  been systematically prying apart the underlying causes of electrical misfiring that can occur in the heart. In the third of a series of publications triangulating issues that lead to cardiac arrhythmias, he explores the structure and binding properties of Junctophilin, which he describes as a “hot spot for cardiomyopathy mutations.”

In a recent interview, Dr. Van Petegem discussed why an experimental model of Junctophilin was important to obtain and what insights have been revealed by means of a 3D rendering of the protein.

“It was one of the pieces of the puzzle that was missing entirely,” he says.  Junctophilin has been recognized for over two decades as being critical in the function of skeletal and cardiac muscle, but also neurons. We were lacking a complete description of the 3D structure, and an understanding of how it actually regulates the various ion channels that are expressed in muscle and in neurons.” 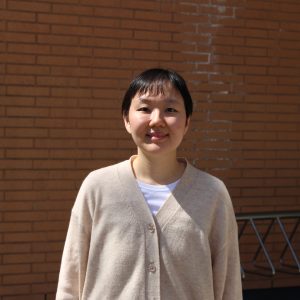 “We can use the 3D structure to our advantage, using it to map mutations that could lead to cardiac disease,” notes Ashley Yang, first author on a recent PNAS paper with Dr. Van Petegem and colleagues. “This can provide mechanistic insights, and hint at new potential treatments in the future.”

Those mechanistic insights include figuring out why the sequence of Junctophilin is what it is. “It has a very peculiar sequence—a sequence that’s being repeated, called ‘MORN’, or ‘membrane occupation recognition nexus’,” says Van Petegem. “They’re present eight times in the Junctophilin gene, with certain parts of the sequence that are conserved. It wasn’t entirely clear why that is. It was recognized already, since its identification two decades ago, that there are certain repeats that are conserved and now with the 3D structure, we can tell exactly why that is the case. The parts of the sequence that are repeated are holding the protein together in 3D space.”

Visually and structurally, the MORN repeats are like ribs.

“This is interesting from the basic protein folding viewpoint,” observes Van Petegem. “But where the structures really help us is to understand how Junctophilin binds and regulates ion channels, because in the end, the heart, skeletal muscle, and neurons, are all driven by electrical activity. And the electrical activity is mediated by proteins called ion channels. Junctophilin has a very peculiar role, because it organizes how ion channels are located next to one another in various cells. In cardiac and skeletal muscle in particular, it organizes two types of ion channels. One is called the voltage-gated calcium channel that sits in the plasma membrane, and the other is a channel called the Ryanodine Receptor, which sits in the membrane of the sarcoplasmic reticulum.

“Our model is that Junctophilin can bind both of these channels at the same time, and therefore bring them in close proximity. That proximity is really critical for cardiac and skeletal muscle function, but also in other cell types. With the 3D structure, we were able to capture not just Junctophilin on its own, but also how Junctophilin binds this voltage-gated calcium channel. So, it tells us which amino acid residues of both proteins are involved in the interaction. On top of that, Junctophilin is an important disease target. There are many mutations in the cardiac isoform of Junctophilin that cause cardiomyopathy. We can now see on the 3D structure where they are located and use that to predict what those mutations could be doing.”

It’s one thing to look at mutations on a gene sequence. That will tell you that gene is important, according to Van Petegem, but it doesn’t reveal the mechanism by which those mutations act on the protein’s 3D structure. That structure was obtained using macromolecular crystallography beamlines at the Stanford Synchrotron Radiation Lightsource, or SSRL, and the US Government’s Chicago-based Advance Photon Source by Ashley Yang and fellow trainee Pankaj Panwar, who was also a co-author on the recent PNAS publication. Manipulating the SSRL remotely via computer in Vancouver, they were able to obtain high-resolution diffraction data and to determine experimental phases, both of which were critical for obtaining the crystal structures of two protein variants of Junctophilin, JPH1 and JPH2.

“Now, we have a complete, very detailed description of how Junctophilin engages voltage-gated calcium channels,” says Van Petegem. “That just wasn’t known before. There were different theories, you could also say opposing views. In a way, we do confirm the view that one group in Japan had, that Junctophilin binds to this particular region of the voltage-gated calcium channel. We definitely can confirm this, because we can see it bound – we have a very high-resolution description. That’s a very important advance in this study.

“Another thing is, in Junctophilin, the structure is like a twisted skeleton. I mentioned these ribs, and then, there’s this kind of a helical backbone. You have to see the structure to see the ribcage. Now, before the structure was known, it was proposed that the helical backbone would span the gap between the plasma membrane and the membrane of the sarcoplasmic reticulum. In cardiac and skeletal muscle, for voltage-gated calcium channels to talk with Ryanodine receptors, they need to be close together. In part, it’s also driven by the membranes being close together. You will find that at certain sites, the plasma membrane of the cell is very close to the membrane of the sarcoplasmic reticulum. And the idea was that this alpha helix region within Junctophilin would be the determinant of this gap between the two membranes.  We see now that that cannot be the case, because we know that helix actually forms a backbone for the ribs of Junctophilin. The 3D image shows that the gap is not mediated by that alpha helix, and that it must be mediated by something else.” 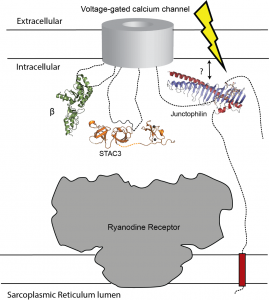 “This is just a very schematic diagram of what we call the minimum components for muscle excitation-contraction coupling,” adds Van Petegem. “This is particularly for skeletal muscle. Something very similar, but not identical, occurs in cardiac muscle. At the bottom, these horizontal lines represent the membrane of the sarcoplasmic reticulum, on the top, this is the plasma membrane, which contains the voltage-gated calcium channel. What happens with skeletal muscle is that, for the muscle to contract, you need calcium to go from the sarcoplasmic reticulum, through the Ryanodine receptor into the cytosol itself. The signal for that originally is electrical. You’ve got several ion channels that cause an electrical signal, and the voltage gated calcium channel in the plasma membrane will sense this. And then ‘somehow’—because we don’t know how it happens—this triggers opening of the Ryanodine receptor.

The holy grail of muscle excitation

“This is what I would call the holy grail of muscle excitation-contraction coupling, because this process has been known to exist for decades. But we still don’t know the full mechanism. What we do know is that the proteins that are involved include the Ryanodine receptor, the voltage-gated calcium channel, and Junctophilin. It also involves STAC3. It also involves these beta subunits in green, which is a component also of the voltage-gated calcium channel. All of these components are targets for disease-causing mutations.”

“So, with all these things, we now know exactly how these three proteins bind the voltage gated calcium channel. That is now very well described. Junctophilin was one missing piece that we now have. What we don’t know is how any of these bind the Ryanodine receptor. So that’s what we are currently trying to figure out—how everything fits together. And three interesting future questions, of course, involve trying to find out how any of these proteins bind the receptor.”