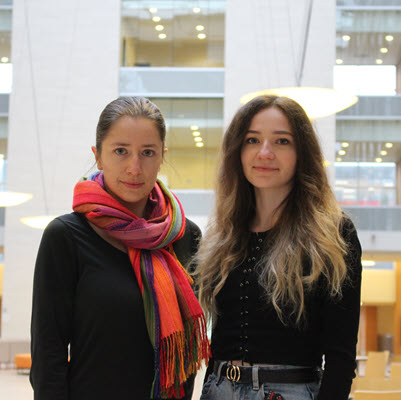 Returning to the science amidst personal turmoil: Ukrainian trainees describe their “new normal”

It’s hard to focus on the science with an invasion looming, and you’re trying to get your mom to safety. She has visa for Canada, but you can’t get her on a flight.

You grew up knowing your dad is in the army, but nothing prepares you for the massive anxiety of knowing he’s suddenly commanding troops in a war with Russia, facing down a superpower’s forces.

Diana Vasyliuk, a Master’s student in the Yip lab defended her MSc thesis1 the day after the invasion. Her father is an officer in the Ukrainian Army, defending Kyiv. “Keeping it together to get through the defense was challenging,” says Diana, “as all my thoughts were on my friends and family’s safety. The support from my lab helped me to successfully defend my thesis.”

“I was on track to complete my degree and then this invasion happened,” says Kateryna Ievdokymenko, a PhD student in the Hallam lab from Eastern Ukraine. She was set to defend her dissertation2 in July, but found “you cannot really work for a few days like this, or be present. You just do the techniques in the lab.” As she prepped for her exit seminar in Vancouver, Kateryna’s parents had made their way west while Russian troops were still sitting in Belarus. Her mother finally got out, the week before the shelling began. Her father decided to stay and enlist.

“After a month, you are still very stressed about the war progression but you are slowly getting used to it,” says Kateryna. “However, after seeing photos from Bucha, Irpin and other cities, I have really hard time comprehending what civilian people are going through every day in the occupied regions.”

It’s all part of adjusting to a new normal, that isn’t normal at all.

Both trainees attended Taras Shevchenko National University of Kyiv, Diana in the Department of Biotechnology, and Kateryna in Genetics. They didn’t encounter one another there, nor were they aware there was another Ukrainian in the LSI at this time, until arranging to participate in an interview for this article.

It was Diana’s idea to share her story, and Kateryna has joined in to help raise awareness in the LSI community. Speaking for themselves, and what they know of other Ukrainian students far from home, concern for loved ones back home is paramount, but there are other pressing issues:  The lack of information can be maddening – there’s never enough from family or news services, or friends. The sudden and intense financial vacuum that also occurs when parents’ jobs – and salaries – disappear makes it tough to get by.

Drawing close to, or having finished their respective degrees, the two found the strength and support to think about their next steps. Kateryna has a Mitacs Elevate fellowship arranged with Renaissance Biosciences and Dr. Juli Carillo in Food Sciences at UBC, while Diana has an internship with Merck set up for the summer, in Darmstadt, Germany. Once that’s complete, she plans to find a job in the biotech sector in Vancouver.

Not everyone is so fortunate, and they encourage labs and departments affiliated with the LSI to open their arms to other Ukrainian trainees and postdocs whose programs and prospects have disappeared. Hope and an opportunity to continue their studies is vital, as the war continues, and the long period of reconstruction remains a dream.

LSI’s bake sale for Ukraine, instigated by Dr. Carolina Tropini, and public statements by individual researchers that acknowledge the unfolding tragedy in their country touch both trainees. Diana and Kateryna notice Canadians may not like the high gas prices and other supply chain issues associated with the war, but they are not losing sight of what is at stake for Ukrainians and Ukraine.

“It’s so amazing to see all the support from the Canadian government, and Canadians,” says Kateryna. “We really appreciate it,” adds Diana.