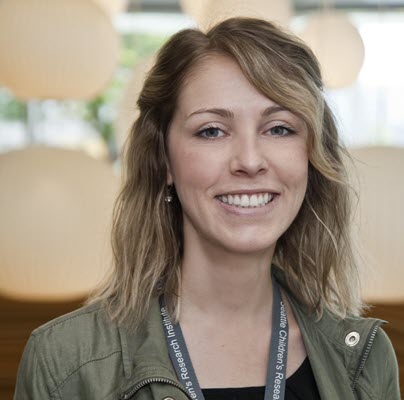 How does signaling among different types of immune cells impact embryonic development?

The processes governing proper development of the embryo are being recognized as increasingly complex in nature and highly sensitive to the maternal environment. Dr. Jessica Rosin is an Assistant Professor in the Department of Oral Biological & Medical Sciences, UBC Faculty of Dentistry, whose third floor lab in the LSI is focusing on how distinct populations of immune cells signal to nearby cells during embryogenesis to contribute to development, and how disruptions such as maternal stress and infection may contribute to neurodevelopmental disorders and craniofacial defects.

We welcome Dr. Rosin the LSI, and celebrate Brain Awareness Week 2022 with a Q & A about her research.

Q: I see that you did two postdocs, and that there was a change in focus between them. What was behind that move, and how has it impacted your subsequent research?

A: I initially completed my PhD with John Cobb at the University of Calgary, where I studied the role of regulatory elements in contributing to transcription factor function in mice. During this time, I specifically focused on the role of Shox2 during limb and brain development (e.g., cerebellum & hindbrain development), but towards the end of my PhD I became interested in facial nerves and craniofacial development, as Shox2 also had functions there.

To continue with these interests, I joined Eric Turner’s laboratory at Seattle Children’s Research Institute for my first PDF, where I again examined how regulatory regions and transcription factors (this time Hmx1) contributed to lateral facial morphogenesis, including facial nerves.

Upon completion of my first PDF, I decided to switch my focus from gene regulation and transcription factor studies to understanding cellular heterogeneity, and particularly how a single cell type could act in different contexts to contribute to fetal development.

Considering I have interests in both craniofacial sciences and neuroscience, I became interested in microglia, as they are a unique population of resident macrophages and phagocytic immune cells within the CNS. However, macrophages also exist in other tissues, including craniofacial tissues, suggesting they could share common molecular mechanisms during fetal development. Therefore, during my second PDF with Deborah Kurrasch at the University of Calgary, I used an inhibitor that disrupts microglia, macrophage, and osteoclast function to study whether they were important during embryogenesis. This work resulted in both neural and craniofacial phenotypes, which is the basis for my laboratory now. Given that these cell types (i.e., microglia, macrophages & osteoclasts) appear to play important roles during fetal development, and that as immune cells they are capable of reacting to environmental perturbations, we are also interested in how disrupting the intrauterine environment (e.g., maternal stress, infection, etc.) might contribute to developmental disorders.

In short, I would say that during my PhD I gained a strong background in developmental biology, with interests in both neuroscience and craniofacial sciences. During my first PDF, I explored my interests in craniofacial biology, but I missed the neuroscience field and I wanted to find research projects that would allow me to study both systems. While my second PDF started off as neuroscience focused, I was able to study a cell type (microglia) that shares common features with macrophages, which exist throughout the body. By focusing on immune cell functions, I am now able to study both how these cells contribute to the development of craniofacial tissues and the brain, but also how their shared molecular mechanisms allow them to react to environmental perturbations, which may contribute to neurodevelopmental disorders and/or craniofacial defects.

Q: Tell me about your research program here at UBC

A: In the Rosin lab, our objective is to understand how distinct populations of immune cells (e.g., microglia, macrophages, etc.) signal to nearby cells during embryogenesis to contribute to development. We employ a variety of experimental approaches to identify unique cell types and the physical means through which they interact with or molecules they use to signal to nearby cells within their surroundings. By disrupting these intricate cellular interactions using genetic knockout lines, pharmacological inhibitors, or environmental insults (e.g., maternal stress, infection, etc.) that perturb the system, we are able study how altering normal developmental programs impacts neurodevelopment and craniofacial development.

Q: What do you look forward to, coming into the interdisciplinary environment at the LSI?

A: The first thing that drew me to the LSI is the multidisciplinary environment which supports outstanding state-of-the-art research. Given the close proximity to outstanding researchers nearby our lab space within the LSI, this is helping aid in collaborations we were interested in pursuing, but also facilitating research directions that we had not originally thought of. For example, we are currently collaborating with Drs. Joy Richman and Sid Vora on our craniofacial development and dysregulation projects. Similarly, the Rosin lab is collaborating with Dr. Victor Viau on the impact of stress on hypothalamic neurodevelopment, and also Dr. Mark Cembrowski to help employ spatial transcriptomics for our various analyses.