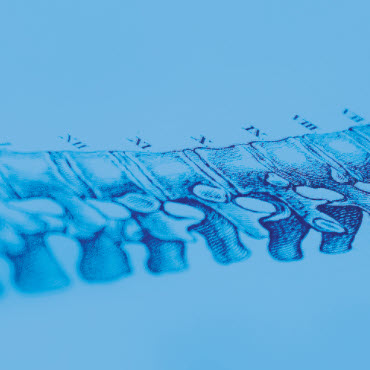 Growing up, Wolfram Tetzlaff always knew the path he would take, a path that started with a fascination with his father. “As a little boy I watched my dad, who had come back wounded from the war. I always wanted to understand why he couldn’t lift his hand.”

Tetzlaff wanted to figure out why the nerves in his father’s shoulder never repaired after being struck by shrapnel.

Curiosity and a drive to help others with nerve and spinal cord injuries (SCI) would eventually lead Tetzlaff to medical school in his native Germany, followed by a PhD at the University of Calgary. Finding how to repair SCI became Tetzlaff’s life’s work. He came to Canada in the 1980’s after Montreal researchers rediscovered that nerve fibres in the central nervous system can regenerate if they are provided with an appropriate bridge to fill the gap in the damaged tissue where the injury occurred.

It has been known for some decades that we need to get the axons, these connections, to grow across a gap that’s about a centimetre or two long. At the moment there is no method of creating that connection.

“About 20 years ago, in discussions with my biological material colleagues in zoology who studied spider silks, we came up with the idea that what we needed was an injectable bridging material, that could be somehow aligned, to provide this kind of repair structure (bridge) for the nerve fibres to grow along.”

It has been known for some decades that we need to get the axons, these connections, to grow across a gap that’s about a centimetre or two long. At the moment there is no method of creating that connection.

Tetzlaff is now a professor of zoology and surgery, and director of the International Collaboration on Repair Discoveries (ICORD), a world leading centre for spinal cord injury research located at The University of British Columbia (UBC). There he has teamed up with John Madden and Karen Cheung, both engineers, researchers and UBC professors who specialize in developing materials like polymers and hydrogels that can be used in and on the human body.

“I was going through Tetzlaff’s lab and he started going through this vision of spinal cord repair and the challenges,” says Madden.

Those challenges stem from the gap in an injured spinal cord. The spinal cord is what links your brain to the rest of your body. When an injury occurs―as a result of a fall, car accident or gunshot wound—there is scar tissue around that injury on the spinal cord. That scar tissue creates a gap preventing nerves from connecting and talking to each other. If those connections are not there you lose basic body functions like walking, use of your hands, urination, bowel movement, sexual function, sweating and temperature control.

“It has been known for some decades that we need to get the axons, these connections, to grow across a gap that’s about a centimetre or two long.” adds Madden. “At the moment there is no method of creating that connection.”

The SCI field has been chipping away at bridging technology for more than a decade with some success in artificial animal lesions. It is essential that a bridging material preserves the delicate spinal cord and prevents further damage to functioning nerve fibres. Inserting solid bridge materials has proven to be high risk, as the procedure could jeopardize spared body functions.

Tetzlaff asked Madden and Cheung to develop a liquid material to create a bridge to help the axons grow across the gap. The liquid would need to be injected into a SCI patient using a machine vision-guided robotic apparatus to ensure the procedure would be low risk and minimally invasive to avoid further damage to any remaining connections in the spinal cord.

This minimally invasive procedure would be a world first and has the potential to be transformative in the treatment of SCI patients.

Dr. Karen Cheung, a Bioengineering Professor in the Department of Electrical and Computer Engineering based in the LSI will co-develop a liquid bridge to help axons grow across 1-2 cm gaps formed by spinal cord injury.

“Our vision is that we insert a needle into the damaged part of the spinal cord and inject a liquid. In that liquid are tiny rods,” Madden explains. “Those rods are aligned by an external magnetic field to provide conduits along which the nerve fibres grow. We add some drugs as well to get rid of the scar tissue and awaken the nerves.”

This minimally invasive procedure would be a world first and has the potential to be transformative in the treatment of SCI patients. The team’s project, titled Mend the Gap: A Transformative Biomaterials Platform for Spinal Cord Repair, has been awarded $24 million over the next six years through the New Frontiers in Research Fund (NFRF) 2020 Transformation stream. Headed by Madden, the team is supported by many UBC departments and faculties, including the School of Biomedical Engineering, Department of Electrical & Computer Engineering, and the Faculties of Applied Science, Medicine and Science.

Working with 32 researchers, engineers and surgeons from Canada, the United States, Europe and Australia, the team will develop and test the liquid softgel to be injected into the spinal cord. Collaborators in Canada include Western University’s Victor Yang, who is working on the minimally invasive injection procedure, and Molly Shoichet of the University of Toronto and Alyson Fournier at McGill University who focus on drug delivery methods and ways to stimulate nerve fibre growth. Karim Fouad at the University of Alberta is carrying out preclinical experiments on multi-component treatment delivery.

“Our goal, at the end of the project, is to prepare for the clinical trial stage, ultimately testing in humans,” says Madden.

“We are so thankful and so privileged to have this funding grant,” says Dena Shahriari, project co-principal investigator, UBC assistant professor and biomedical engineer with a focus on bioelectronic devices and materials. “We are trying to serve people who have been impacted by spinal cord injury. All of us have different expertise but we have this shared dream.”

Laura De Laporte shares that dream. An expert in advanced materials for biomedicine and professor of chemistry at the DWI Leibniz-Institute for Interactive Materials in Aachen, Germany, De Laporte started developing a magnetically aligned gel to ultimately treat SCI patients about five years ago. Her work grabbed the attention of the Canadian researchers. She is now one of 11 co-principal investigators on the project, alongside Tetzlaff, Madden, Cheung and Shahriari. De Laporte sees this technology as the future of SCI treatment.

“I always imagined creating a material that combined injectability with an oriented structure to guide nerve regeneration. This minimally invasive approach seemed like it would be the holy grail, where you avoid doing more damage to the body and creating an environment that enables natural healing. By teaming up with researchers in Canada and abroad, this technology has the ability to go global and accelerate the path to a treatment that minimizes risk.”

Because this surgery will be minimally invasive, it’s believed recovery time would be relatively short and the procedure less expensive. The Mend the Gap team believes the technology may be most successful in patients who have a “new” spinal cord injury, but they hope to discover that it may also help people who have been living with a SCI for years. Because the team is conscious of the enormous ethical responsibility attached to this research, it includes experts in neuroethics and collaborators from within the SCI community.

“We need to be careful not to give people too much false hope from the beginning because this is an area where a lot of people have made promises before,” adds Madden. “We need to make sure we’re realistic so the population we’re aiming to help is not expecting a miracle solution anytime soon.”

“This research is what makes me wake up in the morning and what makes me not want to go to sleep at night,” adds Shahriari, “but while I am all about research and quality of life, I’m also about empowering people living with this condition and their families.”

Tetzlaff says finding a “cure,” as it’s usually understood, is unrealistic at this time because the central nervous system is extremely complicated. “It depends on what you define as cure,” Tetzlaff adds, “—a pianist getting the ability to play piano again, I would say that would be overly optimistic. Instead, if you define a cure as somebody who essentially has independence by regaining hand function and getting bowel and bladder functions or blood pressure control back, then for this person that would be a form of cure.”

What Tetzlaff does hope is that they can improve motor function, increase life span and provide a better quality of life for SCI patients and their families. That, he says, would be a success.