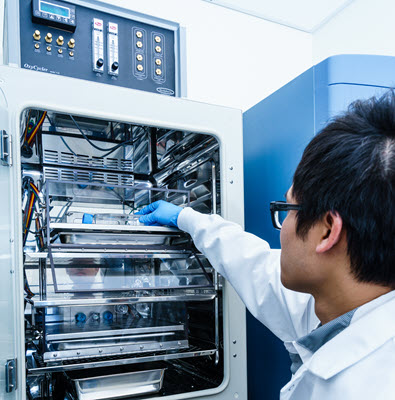 Diabetes research in the Kieffer lab

More than 300,000 Canadians live with Type 1 diabetes, a chronic disease that requires patients to inject infusions of insulin and test their blood sugar throughout the day in order to live. Although there is currently no cure, UBC researchers at the Centre hope to change that by bringing new immune and cell therapies to the clinical testing stage within just five years.

“The JDRF Centre of Excellence at UBC will transform Type 1 diabetes research in Canada, sparking new collaborations, removing barriers and accelerating progress toward a cure,” says Dr. Bruce Verchere, professor in the departments of pathology & laboratory medicine and surgery, director of the Centre for Molecular Medicine and Therapeutics and Irving K Barber Chair in Diabetes Research at UBC. “I am tremendously proud to be working alongside my colleagues, JDRF Canada and our partners to put an end to Type 1 diabetes within our sights.”

The new Centre will unite the world-leading expertise of UBC researchers and partnerships with industry, health care, government and academia to foster the rapid translation of discoveries into new treatments that could one day lead to a cure.

“This has been a team effort over a long period of time,” states Dr. Johnson, a professor in the Department of Cellular & Physiological Sciences and Surgery at UBC, “including major contributions from Dr. Tim Kieffer,” who is currently on leave serving as chief scientific officer of ViaCyte. “Importantly, the research that underlies the third theme area – protecting β-cells from stress – comes from an LSI collaboration between my lab, specifically led by a former postdoc, Dr. Evgeniy Panzhinskiy (now faculty in the Department of Biochemistry), and Dr. Eric Jan, who is a world leader in studying cellular stress response mechanisms.

Type 1 diabetes is caused by dysfunction of both the immune system and pancreatic beta cells, yet these areas are often studied in isolation. The Centre brings together expertise from both domains to integrate the study of the immune system, beta cells and their complex interactions.

“We hope that the new JDRF Centre of Excellence will accelerate our research, but integrating our teams of scientists, who are working on these three major problems even closer with each other,” continues Johnson. “It will also provide resources to expand early stage studies and translate later stage studies into clinical trials. Our work has the potential to advance both therapies for people who are living with diabetes, but also to design strategies to prevent diabetes from advancing in people who are at risk. ”

“Launching Canada’s first JDRF Centre of Excellence at UBC’s Faculty of Medicine is a meaningful opportunity for collaboration that will accelerate discovery and innovation toward a cure for Type 1 diabetes,” says Dr. Dermot Kelleher, dean of the faculty of medicine and vice-president of health at UBC. “Our shared vision to prioritize team science will speed up the development of accessible immune therapies that alleviate dependence on insulin and ultimately improve health outcomes for patients.”

Progress toward this goal is already underway, and contributions to the science are emanating from the LSI. In the first study of its kind, a multi-year clinical trial supported by JDRF Canada and other funders and  co-led by Dr. Kieffer, demonstrated that a stem cell-based treatment delivered through an implantable device can produce insulin in the human body. The study is an important breakthrough in diabetes treatment that researchers hope will one day eliminate dependence on insulin injections. Learn more

“All of the studies that will be supported by the Centre initially are continuations and expansions of ongoing work,” adds Dr. Johnson. “The impact will be huge for our labs, but more important, it will allow us to expand our team and collaborators, bringing new people into the Type 1 diabetes research field, and nurturing the next generation of Type 1 diabetes researchers.”

“The JDRF Centre of Excellence is a unique model that will develop and define new ways of moving research forward and will cultivate future leaders in Type 1 diabetes research,” says Dave Prowten, President and CEO JDRF Canada. “We are extremely excited to partner with this exceptional team because they bring multi-faceted expertise to accelerate the integrated study of the immune system and beta cells and their complex interactions – which we are confident will fuel the path towards a cure.”

The JDRF Centre of Excellence at UBC is the first in Canada and among only five Centres worldwide. “The Centre is truly a reflection that Vancouver is a world-leading site of diabetes research,” concludes Johnson, “developed over many decades of visionary leadership, and innovative science.”