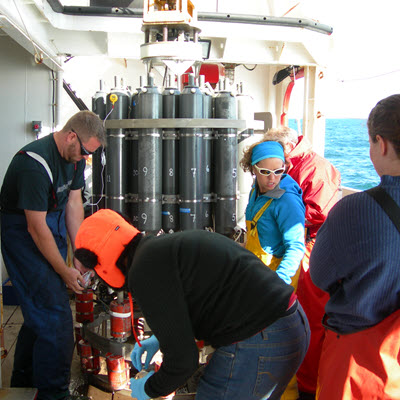 Researchers have found the two-year heatwave known as ‘the Blob’ may have temporarily dampened the Pacific’s ‘biological pump,’ which shuttles carbon from the surface ocean to the deep sea where it can be stored for millennia.

Canadian and European researchers, in collaboration with the U.S. Department of Energy Joint Genome Institute, conducted a large-scale study of the impact of one of the largest marine heatwaves on record – colloquially known as the Blob – on Pacific Ocean microorganisms. Their observations suggest that it’s not just larger marine life that is affected by abrupt changes in sea temperature.

“Heatwaves such as the Blob may decrease the ocean’s biological role as a carbon sink for fixed atmospheric carbon,” said Dr. Steven Hallam, a microbiologist at the University of British Columbia and author of the paper published in Nature Communications Biology.

This ‘biological pump’ process is an important mechanism for buffering the impact of human activity on Earth’s climate, said co-author Dr. Colleen Kellogg, a research scientist with the Hakai Institute. “The ocean is a huge global reservoir for atmospheric carbon dioxide. If marine heatwaves reduce the capacity for carbon dioxide to be absorbed into the ocean, then this shrinks this reservoir and leaves more of this greenhouse gas in the atmosphere.”

Microbes form the base of the marine food web, performing critical functions such as synthesizing and recycling organic matter. Very little is known about how these invisible community members are affected by marine heatwaves, but understanding their responses can provide a vital sign for the rest of the marine food web.

“Marine heatwaves are one of the big challenges of climate change,” explains Dr. Sachia Traving, lead author on the study at the University of Southern Denmark. “Knowing how they affect microbes – some of the smallest but most abundant organisms on earth – will help us understand how heatwaves will impact life in our future oceans.”

To investigate these responses, the study brought together researchers from UBC, Fisheries and Oceans Canada’s Institute of Ocean Sciences, and the Hakai Institute. They combined seven years of DNA sequencing and oceanographic measurements from an open-sea buoy known as Ocean Station Papa (OSP) to chart how microbial communities were structured before and during the most severe marine heatwave in recent time.

OSP is the terminal station of the Line P transect. Running continuously since 1956, Line P is one of the longest running oceanographic time series in the world, and is composed of 26 hydrographic stations originating in the coastal waters of British Columbia and heading westward to OSP, over 1,400 km from the coast.

A major impact researchers observed during the Blob, which began in 2013, was a rise in microbes specialized to survive under more nutrient limiting conditions. That shift was likely a response to changes in the composition of the region’s phytoplankton, which saw a decline in larger cells that contribute to the formation of organic matter particles. That decrease in large particles in turn hinders the ocean’s biological pump and ability to act as a carbon sink.

Research has shown that marine heatwaves are a direct consequence of climate change. These anomalous warm water bodies are occurring with increasing frequency as global temperatures rise, and disrupt the ecosystems in which they appear. Previous work on the Blob has documented its extensive impacts on life in the Northeastern Pacific Ocean, from phytoplankton, zooplankton and fish populations to marine mammals and birds.

The current work extends these impacts to the microbial food webs underlying carbon transport and sequestration in the ocean while reinforcing the need for continued time series measurements to better predict the impacts of climate change on essential ecosystem functions and services.

Photo Credits:
Homepage image by Ocean Networks Canada: The crew of the research vessel CCGS John P. Tully works on a CTD rosette being used along the Line P transect. A CTD is used to measure conductivity (a proxy for salinity), temperature, and depth, providing a profile of a water column from surface to bottom. Outfitted with collection bottles, a CTD can be used to collect water from discrete depths linked to conductivity (a proxy for salinity), temperature, and depth measurements (along with any other sensor parameters associated with the rosette system such as oxygen, or transmittance.