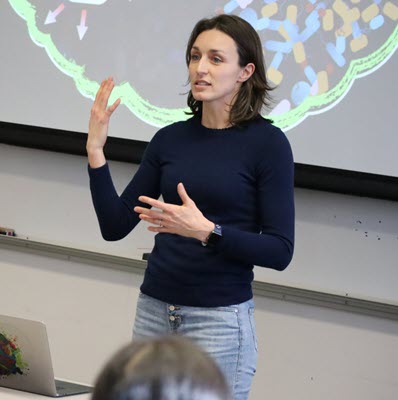 Research Corporation for Science Advancement, The Paul G. Allen Frontiers Group, and the Frederick Gardner Cottrell Foundation have announced awards totaling $770,000 to six multidisciplinary teams from the United States and Canada in the inaugural year of Scialog: Microbiome, Neurobiology and Disease.

The initiative drew more than 50 scientists from a variety of disciplines, including Dr. Tropini and co-investigator JP Yu from the University of Wisconsin-Madison, to propose cutting-edge research to help transform understanding of the gut-brain axis at the chemical, microbial, and immunological level. Each of the 14 individual researchers on the six successful teams will receive $55,000.

“The Scialog meeting was a venue for really engaging and stimulating set of discussions that despite the remote nature of the meeting worked really well,” said Dr. Tropini. “The meeting brought together a truly outstanding set of researchers coming from multiple backgrounds to discuss the brain and the microbiota and felt really lucky to be part of that group.”

Dr. Tropini and Dr. Yu met for the first time at Scialog. “We found a common interest in the effects of missing microbes on brain development,” which is the topic of their successful Scialog Innovation Collaboration Award.

“Nearly all efforts to study the impact of gut microbiota in health and disease have focused on the effect of microbes present in the microbiota,” explains Dr. Tropini. “However, recent strong evidence also points to the critical role for foundational microbial members missing from the microbiota due to lifestyle changes and industrialization. The goal of this project is to define the effect of missing microbes—for example, by use of over-the-counter drugs—on brain development.”

“Better understanding this complex system and the role our microbiome plays in brain health and disease has huge potential to transform our lives and our societies,” said RCSA President & CEO Daniel Linzer, in the press release announcing the awards. “Catalyzing projects that bring together creative, young researchers with diverse viewpoints and experience could pave the way for new discoveries.”

The inaugural meeting of the MND initiative was held virtually April 22–23, 2021.

At the meeting, the group – which includes chemists, physicists, biologists and neurophysiologists – were guided by senior facilitators in identifying bottlenecks and opportunities to advance fundamental understanding of the gut-brain axis and the roles microbiota play in neurodegenerative disorders. They formed teams to write proposals for high-risk, high-reward collaborative research projects based on the ideas that emerged at the conference.

“We believe that interdisciplinary collaboration in biology is key to solving some of its biggest mysteries,” said Kathy Richmond, Senior Director of The Paul G. Allen Frontiers Group. “Key among them: How is the health of our gut related to the health of our brain? Right now, we don’t have a clear picture. By bringing together diverse teams from various fields of study, we know they’ll make discoveries that improve our understanding of this complex system.”

Scialog is short for “science + dialog.” Each multi-year initiative engages a diverse cohort of exemplary early-career scientists from multiple disciplines and institutions across the U.S. and Canada to identify challenges and opportunities in an area of global significance, and to propose collaborative research with the potential for high impact.

“We find some of the greatest innovations coming at the cross of disciplinary minds,” said Shaun Kirkpatrick of RCT’s Frederick Gardner Cottrell Foundation. “These Scialogs bring together people who think out of the box.”