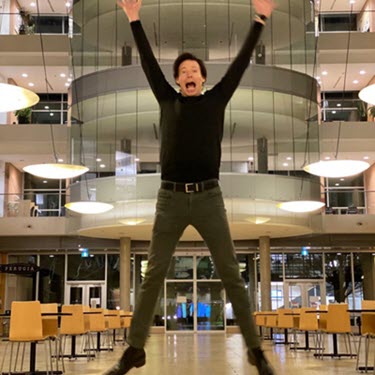 This year marks the 20th anniversary of the Stem Cell Network (SCN), founded by a community of researchers in the field to harness the potential of stem cells and regenerative medicine to benefit the health of Canadians.

Funded by the federal government, and the Networks of Centres of Excellence program, SCN was the first network of its kind in the world.

As part of the celebration of SCN’s history, the Network is sharing stories about the milestones achieved, and the people that built this community. Twenty of Canada’s leading, and up-and-coming stem cell scientists are being asked 20 questions – about their life, their work and their views on the stem cell sector. Among these scientists is Dr. Tim Kieffer, a professor in the Department of Cellular and Physiological Sciences, and member of the LSI’s Diabetes Research Group. Excerpts from the interview follow below.

Where were you born? Where did you grow up?
I was born in California to Canadian parents who opted to flee the USA when I was 3-years old and settle in beautiful British Columbia. I grew up in the interior before finally settling on the west coast.

Where did you go to school?
I attended high school in Kamloops followed by a couple years at Thompson Rivers University (then named Cariboo College) before transferring to UBC. I started university not knowing what I wanted to do and explored everything from law to marine biology.

It was John Brown, a professor in physiology, who gave me my first exposure to medical research, and a summer job working on salmon that got me hooked. My PhD was in physiology studying gut hormones that regulate insulin secretion (“incretins”) under the mentorship of Raymond Pederson and Chris McIntosh. I then continued on this topic during my postdoctoral training at Harvard with Joel Habener. It was an exciting time to see our work contribute to the development of novel drugs being used today to treat diabetes.

What did you want to be when you grew up?
I really had no idea what I wanted to be when I grew up, as I had so many different interests.

I had a real passion for music but realized early on I would not likely make a living that way; I just recently bought an electric guitar and look forward to finding the time to get back into it.

What are you researching right now?
After my training in Boston, my first independent faculty position was at the University of Alberta. While there, I witnessed the incredible success of islet transplant, whereby a spoonful of donor insulin producing cells are infused into the liver of patients with diabetes, freeing them of the burden of insulin injections, and dramatically improving their quality of life. That important
work solidified in my mind the desire to develop new therapies for diabetes where we re-establish automatic production of insulin in the body. A major focus of my lab since has been pursuing gene and cell therapy approaches. My aspiration is to contribute to a cure for diabetes.

Why stem cells?
I think of all the diseases poised to benefit the most from stem cells, diabetes must be at, or near, the top. The clinical path for a cell therapy has been proven by the Edmonton protocol for islet transplant. A few millilitres of cells infused into a patient with diabetes could cure them, and the cells don’t even have to be located in the natural location (pancreas) to do this. As long as they have a good blood supply, they will sense changes in blood sugar and release the appropriate amount of insulin, at the right time, to allow tissues throughout the body to effectively use glucose as an energy source. Current islet transplants remain experimental because there are insufficient quantities available to treat the millions with diabetes. But what if we could make insulin producing islets from stem cells? Then we may have a virtually unlimited supply and be able to treat everyone! This concept is what attracted me to the stem cell field, and funding from the stem cell network and fortunate collaborations with amazing colleagues in industry allowed me to enter into the field to pursue this approach.

What are your predictions for stem cell advances in the next 5, 10, 20 years?
My crystal ball is presently looking at diabetes – I predict we will see patients off insulin following implants of differentiated stem cells within the next five years, commercial products available in the next 10 years, with multiple product types in this field within 20 years.

What would you describe as the most significant moment in your own research career?
My most cited paper describes the rapid degradation of the incretin gut hormones GIP and GLP-1 by the enzyme DPP4, work that I did as a graduate student. My supervisors subsequently went on to show that inhibitors of DPP4 are effective in treating diabetes, and this resulted in a new class of drugs for the treatment of diabetes.

If not a scientist, what would be your dream job?
I think I would enjoy being an architect, designing creative and visually appealing living and working spaces.

What is the best advice you have ever been given? What advice would you give to a trainee just starting out?
To a young kid in primary school? Best advice I was given was to pursue higher education by my childhood neighbour, Sandy Mallory. My advice to others – be resourceful! I think it is such an important characteristic to strive for in whatever we do. To those in elementary school – dream big – you can do anything you want to.

What do you wish you knew more about?
I wish I knew why people get type 1 diabetes. Here we are 100 years after the discovery of insulin, yet we still don’t know why there is a loss of the insulin producing beta cells through some combination of genetic and environmental factors. Why is it so hard to figure out if the trigger is cow’s milk, a viral infection, a lack of sunlight, or…?

Your work is all about discovery and innovation. What is one thing (personally or professionally) that
you still like to do the old-fashioned way?
I’d much prefer to drive an old classic car such as a Porsche with its patina, long throw stick shift, leather interior and sporty engine than a new car with its overly complicated electronics and lacking in character

This Q&A originally appeared on The Stem Cell Network website. The descriptive text and interview questions have been redacted for this post.