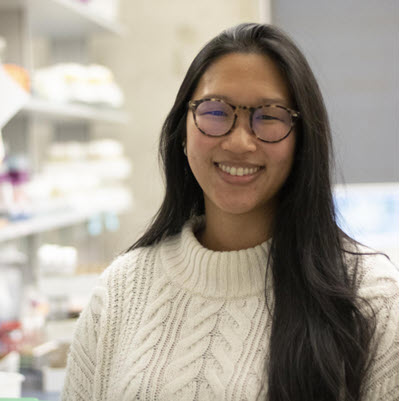 Lianna Wat sweeps CIHR gold, a Gairdner and is going to the Lindau Nobel Laureate Meetings

Graduate programs focusing on health research across the country are asked each year to nominate their top doctoral trainee to attend CSHRF. Wat, now in her final year working with Dr. Elizabeth Rideout, was the first-ever student put forward by the Cell and Developmental Biology program, her home department.

“I am very honoured and proud to receive a CIHR gold, a Gairdner, and the Lindau awards,” says Wat. “I am always working and aiming to be the best that I can be, therefore having my hard work and growth as a scientist be acknowledged through winning these prizes demonstrates that my efforts have paid off and that I am moving in the right direction on my career path. These prizes also mean a lot to me as they give me an incredible amount of motivation to continue pursuing my passions and goals in research.”

“Lianna is a brilliant, creative scientist with a strong drive for discovery,” says Dr. Rideout. “In a short amount of time, Lianna has published a high-impact paper with two more on the way. As a person, Lianna is a talented leader who devotes herself to improving the research environment and local community. She is an excellent mentor to undergraduates in the lab, and has been an integral part of the leadership team for CPhyGS and SoLIT, two graduate student and trainee societies, for the past four years. There is no single vignette that captures or defines Lianna’s exceptional abilities – rather, it is the sum of her skills and activities that makes her outstanding, and a deserving recipient of these awards.”

A ten-slide online presentation of Wat’s PhD project captured the attention of the judges, who are all Gairdner Laureates. “I presented my work on a gene called brummer, which encodes a protein equivalent to mammalian ATGL, and its role in male-female differences in fruit fly fat storage and breakdown,” says Wat. “The goal of my project at the outset was to identify metabolic genes that act downstream of sex hormones and sex chromosomes to regulate these male-female differences in fat metabolism.

Takeaways and potential impacts from doctoral work point to a promising future
“One of the major takeaways from my work is that it’s really important to study both sexes,” concludes Wat. “Especially when we are trying to understand the normal regulation of fat metabolism, because this will pave the way for us to develop better treatments for metabolic diseases associated with abnormal fat storage for both males and females.”

In the world of mammalian research, she adds, “it will be important to look at both sexes in studies on mouse and human ATGL. What my work in flies has indicated, is that when we lose brummer function, it has a bigger effect on males than in females. So, if our findings hold true in mammals, it will be important to make sure there are no sex-specific effects of treatments aimed at inhibiting ATGL.”

Hoping to finish her doctoral work by the end of 2021, Wat is weighing a post-doctoral fellowship, vs pursuing an MD degree. “I met a clinician researcher who has in-patients, and also does research related to those patients,” she says. “That is something that I’m curious about, so I’m also considering medical school. And preferably a medical school that allows me to continue doing research. I think I would really love it, and I would love to be able to balance both.”

Dr. Rideout, Lianna’s mentor, foresees great things for her trainee. “Lianna’s leadership duties in the lab and the LSI community, and her success in these activities, shows that she has all of the important skills to inspire and mentor students that are essential for a career in science,” says Rideout. “In addition to these latest awards, Lianna has won past awards at conferences for her excellent presentations, as well as commendations from the CELL graduate program. Together with her impressive research achievements, Lianna’s leadership, mentorship, and communication skills provide a fantastic foundation for a successful career – she is truly a rising star.”

Lianna Wat’s doctoral research has been funded by CIHR, MSFHR, and NSERC.