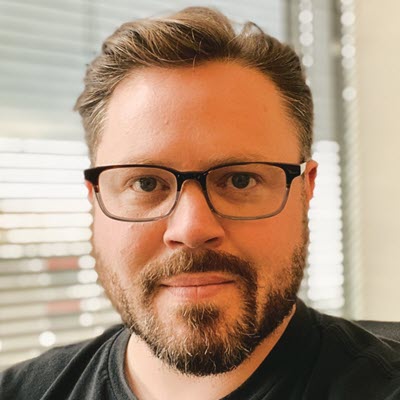 LSI and UBC Faculty of Medicine researchers have found that pH levels may play a key role in the metastasis of esophageal cancer as well as cellular changes that set the stage for its development.

The findings, reported in a cover story appearing in Cellular and Molecular Gastroenterology and Hepatology by Postdoctoral Fellow Shane Duggan, UBC Dean of Medicine Dr. Dermot Kelleher, and researchers in Dublin, provide important context for precursor lesions, or wounds, that present in the esophagus, as well as the eventual escape or metastasis of cancer cells in esophageal adenocarcinoma (EAC).

Only 14 per cent of Canadian patients alive five years after a diagnosis of esophageal cancer. Many patients that develop esophageal adenocarcinoma have a significant history of gastro-esophageal reflux disease, or GERD. Between 5-12 percent of Canadians have the condition, which causes pain, ulceration and inflammation. The episodic wounding of the tissues by stomach acid promotes the development and expansion of a genetically unstable, precancerous lesion known as Barrett’s esophagus.

A strong body of research has focused on the development of Barrett’s esophagus in patients with GERD. Between 10 to 15 percent of GERD patients eventually develop a metaplasia—a transformation of the normal, simple esophageal tissue into an expansive and diverse intestine-like form that is characteristic of Barrett’s. “While this lesion is proposed to arise from the pool of stem cells known to exist within the esophagus, we do not yet understand the how and why,” observes Dr. Duggan.

“We do know changes in the pH levels surrounding cells are induced during episodic gastro-esophageal reflux disease, when stomach acid wounds the esophagus, as well as during the escape of 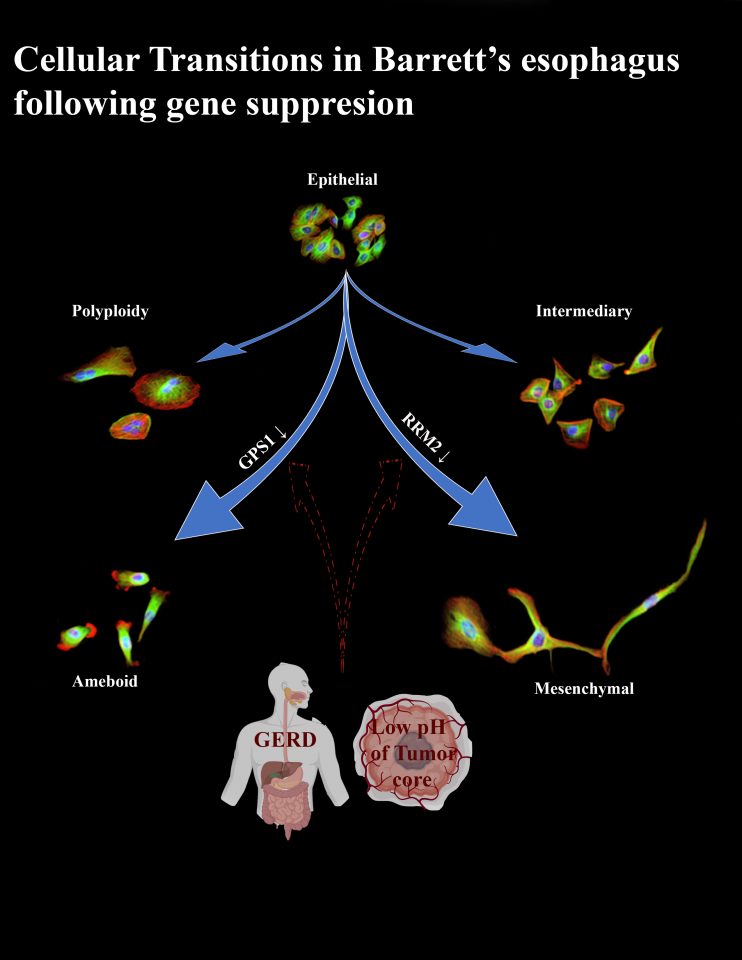 cancer cells through tumor borders in metastasis,” he adds. “In our study, we show novel functions for many genes, such as GPS1 and RRM2, in the regulation of both fast escape-like and slow invasive-type movements respectively. These may facilitate the expansion of Barrett’s esophagus lesions, and metastasis of esophageal cancer cells. The pH environments encountered by esophageal cells may directly enable the niche for cancer development—and further progression that leads to such poor outcomes in esophageal cancer patients.”

This insight arose from high-content imaging analyses and screening. The team screened large, small interfering RNA (siRNA) libraries of 6,000 genes to identify those that impact cell shape and cell movement. This database of images, charting shape changes in cells and their nuclei following gene suppression provides an unprecedented level of detail on the relationships between genes and many functions related to cellular form and structure, such as cytokinesis, the physical separation of cells.

In this study, Dr. Duggan and colleagues used movement as a proxy, or indicator of the cells’ ability to spread. Dr. Duggan hypothesized that low pH conditions accompanying acid reflux conditions—or within tumors—might regulate some of the same genes whose suppression led to shape/motility changes. He then set about assessing the impact of low pH in the two cell lines. “Remarkably,” write Drs. Frank Mckeon and Wa Xian, in an editorial about the study, “there was an intersection in the two datasets, and multiple downstream experiments support the concept that this intersecting gene set could lead to hypermigratory and epithelial-mesenchymal transition (EMT) phenotypes that could be relevant to both 2-dimensional spread by dysplastic BE or 3-dimensional, metastatic spread by EAC cells.”

“We found something really quite fundamental about esophageal—and possibly all cells— and the relationship between their shape, and cancer metastasis,” observes Dr. Duggan. “Cells have to squeeze through other tissues, or expand in wound sites to invade or degrade, but they don’t do this alone. They can act very much like an ant colony traversing a stream providing a bridge to another environment.

During wound healing, cells move collectively or individually to do what they do. But during the development of Barrett’s esophagus and when cancer cells escape, these processes are misdirected. “We chose to utilize an esophageal cell type that represents a transition point between Barrett’s esophagus and the adenocarcinoma, namely high-grade dysplasia, as it displayed attributes fundamental to either end of the cancer spectrum,” adds Dr. Duggan.

“Strikingly, we showed novel functions for the genes GPS1 and RRM2 in the regulation of both fast escape-like and slow invasive-type movements respectively, that facilitate expansion of Barrett’s esophagus and esophageal cancer cell metastasis in a dynamic fashion one occurring earlier followed by the other,” he says. “Tumors have gradients of pHs, even more so cancer cells, as they transit through subtle changes in pH. Thus, pH environments encountered by esophageal cells may directly enable the niche for cancer development and further progression that leads to such poor outcomes in esophageal cancer patients.” 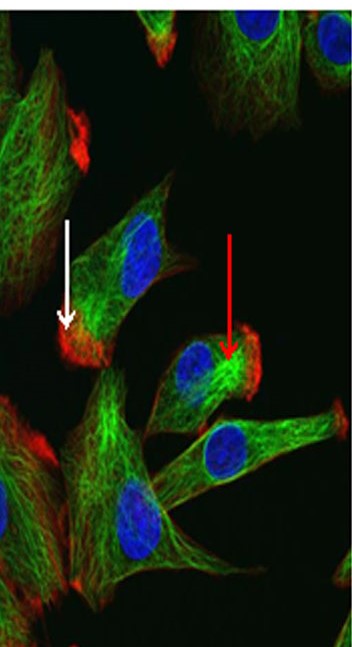 Both the research team and the editorial authors reviewing High Content Imaging of Barrett’s-Associated High-Grade Dysplasia Cells After siRNA Library Screening Reveals Acid-Responsive Regulators of Cellular Transitions express excitement about the potential of the datasets generated in this study, as well as the yield of the overall approach.

Dean Kelleher, a gastroenterologist who has published extensively on EAC, states, “this work, and other work from our group shows that taking an unbiased approach to the biology of esophageal cancer can produce critical information regarding molecules involved in its causation and progression that would not otherwise have been predicted. We are hopeful these insights will help us to develop new treatment approaches targeting all stages of this difficult-to-treat malignancy.”