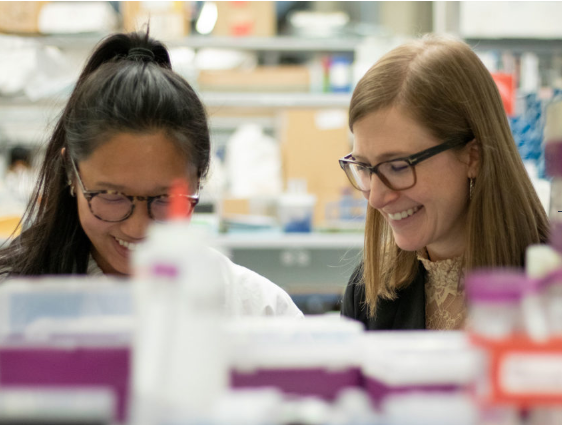 Fruit flies may hold the key to determining how women and men store and shed body fat.

In a new study in PLOS Biology, LSI researcher Dr. Elizabeth Rideout, and graduate student and first author Lianna Wat, used a drosophila model to discover the genetics that underlie differences in how males and females store and metabolize fat.

“We also showed that that increased fat storage in females and lower fat breakdown wasn’t caused by a low metabolic rate,” added Dr. Rideout, an assistant professor in the department of cellular and physiological sciences. “Instead, working with Dr. Justin Buchanan and Dr. Kristi Montooth, we found that mRNA levels of many genes involved in fat storage and breakdown were different in male and female flies. Seventy-four percent of genes we looked at were different between the sexes. One of these genes, triglyceride lipase brummer, was very noticeably different between the sexes: in females, brummer levels were low, and in males, brummer mRNA levels were higher.”

Based on their finding, the researchers reasoned brummer might play a role in regulating those sex differences. When they looked at flies missing the gene, the differences between male and female flies in fat storage and breakdown were “pretty much gone,” according to Dr. Rideout. “The reason the sex difference was eliminated was because males stared storing much more fat than usual, just as much as females. Interestingly, we found that brummer function was needed in the somatic cells of the male gonad, and in male neurons to regulate the male-female difference  in fat metabolism.

“What I think is really cool is that if we hadn’t been looking at both sexes, we never would have figured out that brummer was doing something in the gonad or neurons,” added Dr. Rideout, whose findings also have interesting implications for the role of fat storage in females. “Although female flies store hardly any more fat when brummer is gone,” she said, “their lifespan is reduced by a lot more than male flies without brummer. We didn’t expect to see that at all. So even though fat storage in females didn’t ‘appear’ to be affected by losing brummer, I’m glad we checked all the phenotypes in both sexes.”

These findings are important for many reasons, Rideout said. “First, by defining the fruit fly as a model to study sex differences in fat metabolism, we hope to accelerate the discovery of key genes that can be targeted in males and females to alter fat storage, and potentially correct abnormal fat metabolism. Second, we identified the first metabolic gene that regulates male-female differences in fat storage in any animal. Third, we revealed new roles for brummer in the gonad and neurons. This finding will stimulate more research into how changes to the metabolic genes in these important cell types affect fat metabolism in the rest of the body. This discovery marks the first step in revealing identifying metabolic genes that control male-female differences in other aspects of development and physiology.”

At present, few drugs are available to treat abnormal fat metabolism, and those that are on the market often work better in either men or women. By identifying the genes that explain why males and females have different amounts of fat, the researchers hope to understand why risk of health conditions associated with abnormal fat storage, such as heart disease, affect men and women differently. “We will gain vital information on developing new therapies that are tailored to women, and to men, in treating abnormal fat metabolism,” concluded Dr. Rideout.

A plain language summary of “A role for triglyceride lipase brummer in the regulation of sex differences in Drosophila fat storage and breakdown” authored by Dr. Rideout
A news release by Kerry Blackadar, communications manager with the UBC Faculty of Medicine,
and a January 27, 2020 Twitter thread posted by Dr. Rideout @EJRideout