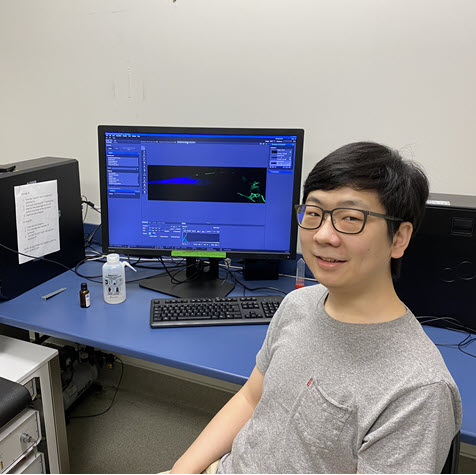 A recent study from the Mizumoto lab at UBC adds new insight into how unwanted extensions from nerve cells (neurites) are eliminated or “pruned” during development, allowing for the formation of the final functional neural circuit.

The mechanisms behind neurite pruning are not completely understood, but their paper, published in eLife this month, elegantly lays out a model for how this could occur.

The nematode, Caenorhabditis elegans, is an ideal model for neuroscientists because their nervous system is simple, composed of only 302 invariant neurons as opposed to > 1 billion in humans. The PDB neuron in C. elegans, which was only recently described to have a function in motor coordination, has a single long neurite that initially grows towards the tail of the animal (posterior), then makes a V-shaped turn at the tail to join the dorsal nerve cord.

“What we found, first of all, is not many studies showed the function of Wnt signaling in pruning, despite its well-characterized role in neuronal development,” adds Dr. Mizumoto. “None of the previous studies showed it could instruct pruning – actively inducing or permitting it. We demonstrated that Wnt induces the pruning, depending on where it is expressed.”

Lu and Mizumoto observed that early in development, there were two additional neurites that branched toward the tail which were gone from most animals 24 hours later. They conclude these neurites underwent “pruning”, a process by which unwanted neurites are eliminated without harm to the cell body, and showed that this process depends on Wnt signaling.

The stereotyped form of pruning they study depends on highly-specific signals which target specific neurites. The authors propose that Wnt (LIN-44/Wnt), found on cells in the vicinity of the unwanted neurites, recruits a protein called Frizzled (LIN-17/Fz) to the tips of neurites, which becomes active and initiates the process of pruning. But how does LIN-44/Wnt induce pruning? Future work from the group will address the cellular mechanisms that act downstream of Wnt signaling in neurite pruning.

The role of Wnt signaling as a gradient morphogenic cue is well known. Morphogens act as graded positional cures that control cell fate specification in many developing tissues. This concept, in which a signaling gradient regulates differential gene expression in a concentration-dependent manner, provides a basis for understanding many patterning processes.1

In contrast, Lu and Mizumoto show that the Wnt signal necessary for pruning does not require the formation of a gradient, via the release and diffusion of the Wnt molecule. Instead, they propose a contact-dependent model, where cells that have Wnt are in close proximity to, or contact, the neurites to be pruned. In the future, they aim to figure out the signal threshold necessary to cause pruning and solve how the anterior neurite is protected.

“I’m obviously curious to know if the Wnt signal in neurite pruning is conserved in vertebrates, such as zebrafish and rodents,” concludes Dr. Mizumoto. “In my lab, we’ll be pursuing the functioning of Wnt signaling – which process is gradient- dependent or independent. There are five genes in the Wnt genome in C. elegans. We can also look at cell division or axon guidance. These are important, fundamental processes of development and cell biology. Our focus is to find the basic, fundamental principles of those developmental processes.”